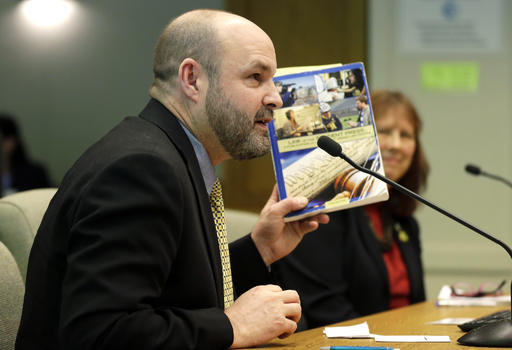 Mike Hiestand, a staff attorney with the Student Press Law Center, holds a copy of his book, Law of the Student Press, as he speaks during a State Senate hearing in 2017, at the Capitol in Olympia, Washington. Washington state lawmakers were reintroducing a bill that would protect student journalists' free speech in school-sponsored media at public schools and colleges in response to a 1988 U.S. Supreme Court ruling in Hazelwood School District v. Kuhlmeier that gave administrators control over what gets published in school media. Hiestand spoke in favor of the measure. The SPLC is a not-for-profit corporation dedicated to defending the First Amendment rights of high school and college journalists. (AP Photo/Ted S. Warren, used with permission from the Associated Press)

The Student Press Law Center (SPLC) is a not-for-profit corporation dedicated to defending the First Amendment rights of high school and college journalists.

The SPLC owes its existence to a commission created by the Robert F. Kennedy Memorial Foundation in 1973.

The commission noted that “censorship is the fundamental cause of the triviality, innocuousness, and uniformity that characterize the high school press. It has created a high school press that in most places is no more than a house organ for the school administration” (Nelson 1974: 48).

The commission then recommended that a national center be established to help student journalists, and in 1974 two groups — the Kennedy Memorial Foundation and the Reporters Committee for Freedom of the Press — created the Student Press Law Center.

Located in Washington, D.C., the SPLC offers the student press free legal advice, and its website covers a variety of student press concerns, including how student journalists can fight censorship attempts and how they can use sunshine laws to gather information.

The center also publishes newsletters and press releases on the individual First Amendment battles being waged by student media; offers attorney referrals and legal document filings, such as amicus briefs, in individual free press cases; publishes manuals and guides such as Press Freedom in Practice: A Manual for Advisers Responding to Censorship and Covering Campus Crime: A Handbook for Journalists; and arranges presentations on student press issues at conventions, conferences, meetings, and other gatherings. The SPLC also produces a newspaper called the SPLC Report that details censorship incidents on high school and college campuses.

In 1979 the center became an independent corporation. Funded primarily through private donations, it is managed by an executive director working under the direction of a 15-member board of directors.

For several years after its founding, the center worked with student journalists who had a relatively high level of freedom thanks in part to Tinker v. Des Moines Independent Community School District (1969), a Supreme Court decision handed down five years before the center was created.

But in 1988 in Hazelwood School District v. Kuhlmeier, the Supreme Court expanded the legal authority of high school administrators to control school-sponsored student expression, including student media, and the center saw annual increases in requests for help.

In recent years, the SPLC initiated a concerted effort, called “Cure Hazelwood,” to urge states to pass state laws that provide student journalists and other students with greater First Amendment protection than provided under the Hazelwood decision.

This article was originally published in 2009 and updated in 2017. Dr. Neil Ralston worked as a reporter and editor for 10 years before beginning a career as a journalism teacher at the college level in 1989. His Ph.D. dissertation focused on the First Amendment attitudes and knowledge of high school students. From 2007 to 2013, he served as a vice president on the board of directors of the Society of Professional Journalists where he worked with students and advisers at college media outlets who faced censorship attempts. He now teaches at Lindenwood University in St. Charles, Missouri.