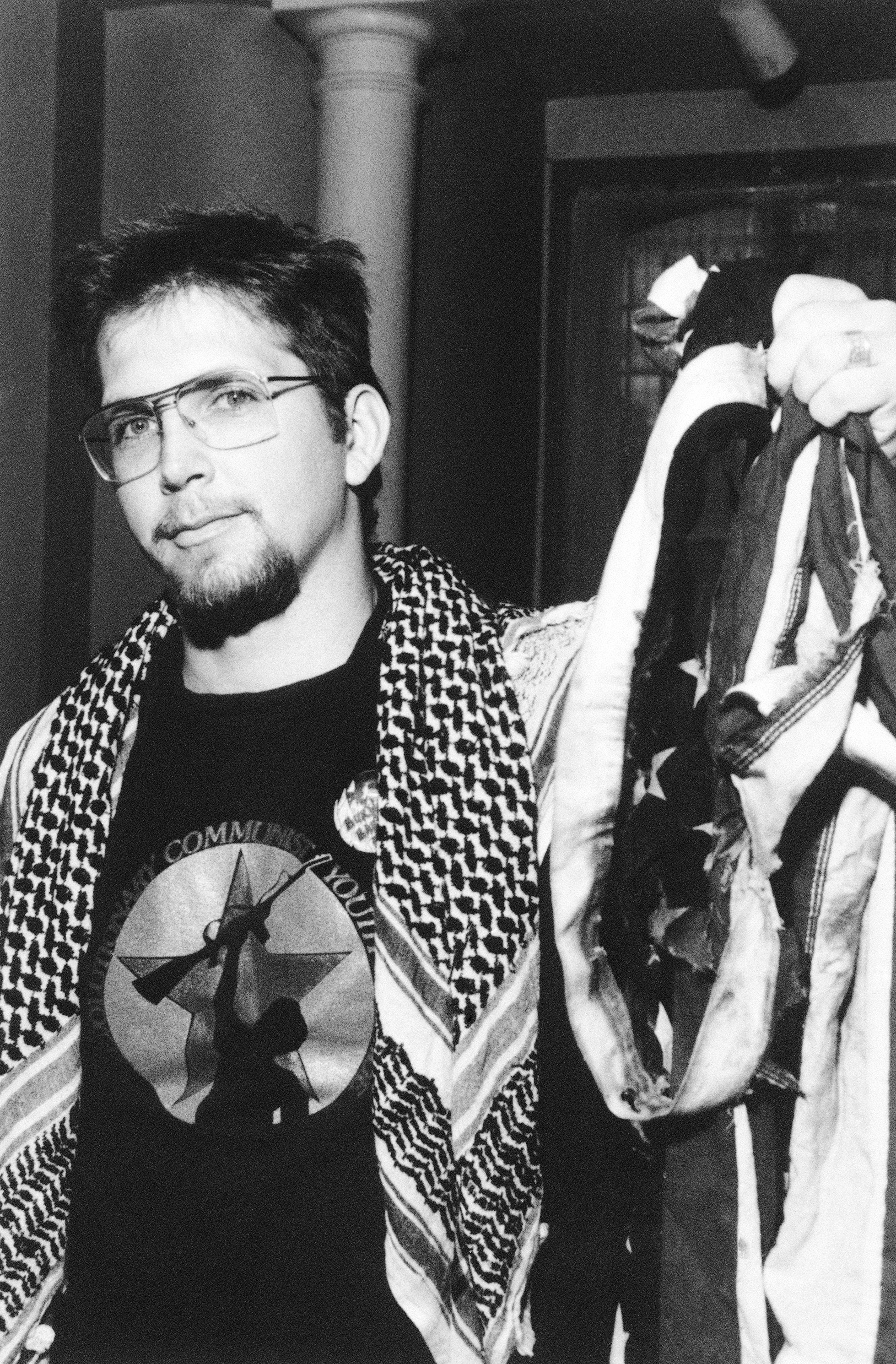 Gregory Lee Johnson burned a flag during the 1984 Republican National Convention in protest of policies made by President Ronald Reagan. The state of Texas argued flag desecration was inherently inflammatory and that state should be able to regulate it to prevent dangers to the public peace. The Supreme Court ruled that the breach of the peace statute referenced in this case was not tailored narrowly enough to encompass only those flag burnings that would result in serious disturbances. Here in 1989, Johnson holds a flag sent to him by an unknown well-wisher. (AP Photo/David Canto, used with permission from The Associated Press)

Breach-of-the-peace laws typically cover conduct that is disorderly and disturbs the public peace and quiet of a community.

Most states have breach-of-the-peace laws

Most states have breach-of-the-peace laws that criminalize certain speech and conduct, including use of obscene or abusive language in a public place, engaging in noisy behaviors (such as firing guns or playing loud music in the late night or early morning), obstructing vehicular or pedestrian traffic, fighting in a public place, resisting lawful arrest, and disrupting a lawful assembly or meeting.

Some laws extend to vagrancy, loitering, and public intoxication. Persons who cause public disturbances that breach the peace may be fined, imprisoned, or both. Due to loss of liberty, property, or both, those convicted of breach-of-the-peace violations may assert due-process claims. As breach-of-the-peace laws are broad in scope and regulate a wide range of conduct and speech, many have been challenged as violating constitutional rights.

Certain speech has been classified by the courts as “low-value” speech, or speech that is not essential to the expression of ideas and has so little social value that any benefits are outweighed by society’s need for public order.

This doctrine is drawn from the Supreme Court’s fighting-words decision in Chaplinsky v. New Hampshire (1942). While distributing Jehovah’s Witness literature in Rochester, New Hampshire, Walter Chaplinsky attracted a crowd. He was confronted by a city marshal who warned him that his activities were disturbing some citizens. In response, Chaplinsky called the city marshal a “God damned racketeer” and a “damned Fascist.”

He was subsequently charged and convicted under a city ordinance that prohibited use of offensive language toward persons in public places. Chaplinsky appealed, claiming the city ordinance violated his First Amendment rights.

The Court ruled that Chaplinsky’s utterances were “fighting words” and therefore not protected speech under the First Amendment; by their nature, his words inflicted injury or tended to incite an immediate breach of the peace. In sum, the Court found that fighting words could provoke the average person to retaliate and cause a breach of the peace.

The Court, however, subsequently limited the scope of the fighting words doctrine. In Terminiello v. Chicago (1949), it ruled that controversial speakers could not be charged with breach of the peace simply for stirring up a dispute. The Court held that Chicago’s ordinance was being used to regulate protected speech in this instance and was not aimed solely at “fighting words.”

Later, in Cohen v. California (1971), the Court further stipulated that offensive or vulgar speech that was not directed at a person or did not cause a violent reaction (such as wearing a jacket in a courthouse emblazoned with the words “Fuck the Draft”) could not be interpreted as disturbing the peace.

Generally the Court has struck down statutes and ordinances using vague terminology to regulate speech, such as “opprobrious” or “abusive” language and “opposing” a police officer, by holding that such terminology can apply to more than just fighting words. The Court has sent a clear message through these rulings that free speech, however offensive and controversial, is afforded a high level of protection.

During the 1960s, civil rights activists were frequently arrested under breach of the peace statutes that came under review in cases appealed to the Supreme Court. In Garner v. Louisiana (1961), African American protestors were arrested and charged with disturbing the peace for sitting quietly at a “white only” lunch counter.

In Edwards v. South Carolina (1963), African American students staged a march to the state house to protest segregation. Although the protest march and assembly were peaceful, the protestors refused to disperse when so ordered and were convicted of breach of the peace. The Court ruled that states could not criminalize the peaceful expression of unpopular views and overturned the students’ convictions.

Louisiana’s breach of the peace statute was tested again in Cox v. Louisiana (1965). Two thousand African-American students marched against racial segregation and assembled at the courthouse in Baton Rouge, Louisiana. The assembly was tolerated until Elton Cox, the leader of the demonstration, exhorted the group to sit in at segregated lunch counters. The demonstrators were at that point dispersed by tear gas, and Cox was arrested the next day for disturbing the peace. The Court struck down the breach of the peace statute as too broad and vague.

Finally, in Brown v. Louisiana (1966), five African-Americans who sat in a public library, peacefully protesting segregation, were convicted of intent to breach the peace. The Court invalidated the convictions, stating that no “intent” to breach the peace had been substantiated and that peaceful assembly was protected by the First and Fourteenth Amendments.

Breach-of-the-peace laws have also been invoked in cases of symbolic speech. In Texas v. Johnson (1989), Gregory Lee Johnson burned a flag during the 1984 Republican National Convention, protesting the policies of President Ronald Reagan. The state of Texas argued that it had a compelling interest in preventing the breaches of the peace that could result if flags were desecrated in public.

The state claimed that flag desecration was inherently inflammatory and that state should be able to regulate it to prevent dangers to the public peace. The Supreme Court ruled that the breach of the peace statute referenced in this case was not tailored narrowly enough to encompass only those flag burnings that would result in serious disturbances; thus, it could not be invoked under these circumstances—especially when no public disturbance occurred at this particular flag burning.

Some constitutional scholars have proposed reforming breach of the peace laws, arguing they should be more narrowly tailored to avoid restricting protected speech. Following court rulings indicating that various laws are too broad in scope, many state and local governments have reformed their ordinances and statutes to define unprotected speech more narrowly and to provide law enforcement officers with better guidelines on speech and conduct that constitute breaches of the peace.