By John R. Vile
Other articles in Categories of Laws and Proposed Laws 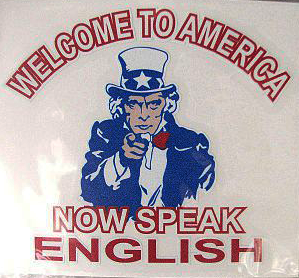 This sign reflects the belief of many Americans that the ability to read and speak English should be a requirement of U.S. citizenship. English-only laws might violate the First Amendment. Not satisfied with legislation at the state level, some members of Congress have proposed amendments to the Constitution that would make English the official language of the nation. (Photo by CGP Grey on Flickr, CC BY 2.0)

Many Americans believe that the ability to speak or read English, or both, should be a requirement of U.S. citizenship, and ballot initiatives in some states have attempted to promote this ideal. Nevertheless, English-only laws might violate the equal protection provision of the 14th Amendment and one or more clauses of the First Amendment.

Legal commentator Margaret Robertson has observed that lower courts that have addressed this issue have found that English-only laws can violate four First Amendment areas:

In 1998 Arizona adopted a constitutional provision making English the state’s official language and requiring that “[t]his State and all political subdivisions of this State shall act in English and no other language.” Maria-Kelley Yniguez, an insurance claims adjustor for the Arizona Department of Administration, challenged this law as a violation of the free-speech clause.

Yniguez wanted to continue the practice of counseling her clients in Spanish or English, depending on their needs. Even though Yniguez subsequently transferred to a job in the private sector, the 9th U.S. Circuit Court of Appeals affirmed a lower court judgment that the law was an overbroad infringement of the rights of both public officials and public employees.

The Supreme Court, in a decision written by Ruth Bader Ginsburg, subsequently voided this ruling in the case of Arizonans for Official English and Robert D. Park v. Arizona (1997) on the grounds that Yniguez’s subsequent employment had made her case moot.

Supreme Court has said schools can teach in different languages

In Meyer v. Nebraska (1923), the U.S. Supreme Court voided a Nebraska law that limited the teaching of modern languages to schoolchildren.

The Court ruled in Lau v. Nichols (1974) that schools had to make provisions for teaching students who knew no English in their native tongue, although many schools have subsequently adopted English-immersion programs designed to enable students to make a successful transition to English.

Congress has considered making English the official language of the USA

Not satisfied with legislation at the state level, some members of Congress have proposed amendments to the Constitution that would make English the official language of the nation. Such an amendment would presumably trump existing First Amendment objections, but courts might still have considerable leeway in how they interpreted it.