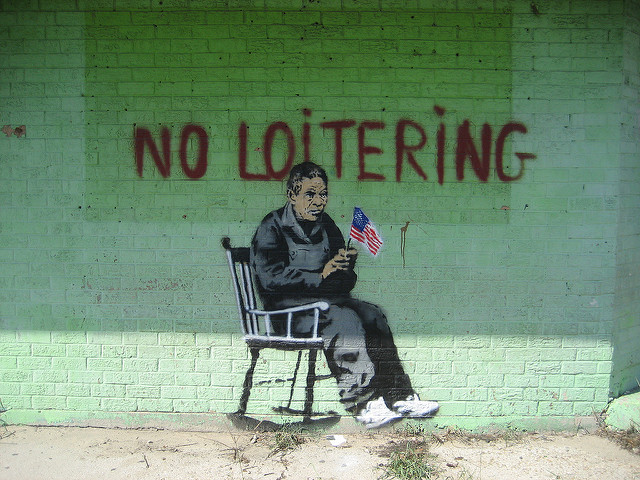 Loitering laws can have a chilling effect on First Amendment freedoms of speech and assembly, and have been ruled as unconstitutional for being overly broad or vague. Many states have tried to rewrite loitering laws to focus on crime prevention, like gang activity and prostitution, but they continue to be challenged. (Photo in the Lower 9th Ward in New Orleans by Infrogmation of New Orleans, CC BY 2.0)

Loitering laws, which make it an offense for an individual to be in a public place for no apparent reason, have been attacked on the grounds of both vagueness and overbreadth, and have generally been determined to be unconstitutional.

Challenges to overly broad loitering laws are based on First Amendment

Unlike vagrancy laws that are aimed at individuals who live on the streets, have no visible means of support, and may beg for money from passers-by, loitering laws do not define a loiterer other than by mere presence and the lack of any discernible intent.

By the 1600s, English itinerant workers and the unemployed were roaming the country’s village and city streets in increasing numbers. As they increased, so did the crime rate. Treating the problem as an effect of England’s depressed economic conditions, Parliament’s Poor Laws included “vagrancy” laws, which normally included the act of loitering. Unlike most of the offenses under the economically motivated Poor Laws, vagrancy was a criminal offense.

Historically, U.S. anti-loitering laws have emphasized the crime prevention aspect of the English vagrancy laws. Today, local statutes against loitering are common throughout the nation’s cities. But they have been attacked on the grounds of having become a useful law enforcement tool for maintaining public order by ridding the streets of society’s less desirable, as well as criminal, elements.

Although the laws may have been intended to address prostitution, gang activities, and drug dealing, police have been accused of also using loitering laws to arrest loafers, pilferers, and the homeless; thus such laws are laid open to charges of vagueness and overbreadth.

Loitering laws are often challenged for vagueness and being overly broad

A statute can be declared “void for vagueness” if it fails to inform the average person of what it is that the law prohibits in a clear and objective manner or fails to provide law enforcement officials with clear and objective standards for its implementation. And it may be declared unconstitutional due to overbreadth of intent and application if it prohibits activities unprotected by the Constitution but might also be used to prohibit constitutionally protected activities.

Jacksonville, Florida, passed a law that prohibited loitering and defined loiterers as “persons wandering or strolling around from place to place without any lawful purpose or object.”

Loitering laws can have chilling effect on First Amendment rights

Based on Jacksonville’s definition of loitering, the U.S. Supreme Court declared in a decision written by William O. Douglas that the law was simply too vague to allow the average person to discern what is prohibited and what is not. Taking a daily walk could be considered loitering, subjecting an innocent person to arrest. Such vagueness in the law raises a second concern: “the net is cast large,” resulting in the individual police officer having virtually unlimited discretion to decide who is loitering and who is taking a walk.

With no objective standards of guilt, the law not only permitted but even encouraged police to apply the law in an arbitrary and discriminatory manner against “the poor and the unpopular.”

The Court also found the laws to be overly broad. While the First Amendment does not specifically mention the right to walk or loiter, it does protect a right to free speech, a right to assemble, and a right to petition the government. Jacksonville’s definition of loitering was so broad that it could be used to either deny these rights or to have a “chilling effect” on their exercise by threatening an arrest.

Some loitering laws have been rewritten, still been challenged

As a result of Papachristou, most loitering laws were rewritten to include specific offenses associated with loitering — “loitering-plus” ordinances. Nevertheless, those revised laws are subject to the same judicial scrutiny as the previous, more generalized, loitering laws.

The Court invalidated a Chicago gang loitering ordinance in City of Chicago v. Morales (1999) as unduly vague, but upheld a trespassing statute applied to nonresidents of public housing in Virginia v. Hicks (2003) against facial overbreadth charges while leaving open the possibility that it could be challenged on an “as-applied” basis.