By Alex Aichinger
Other articles in Categories of Laws and Proposed Laws, Freedom of the Press issues and topics 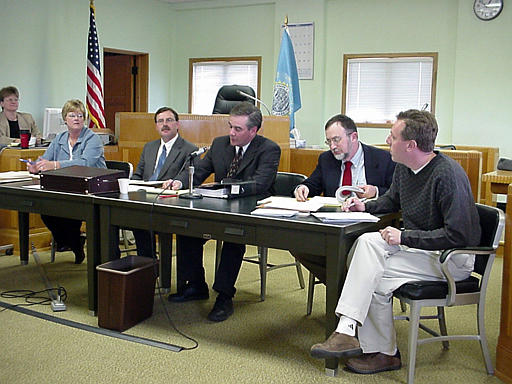 The public has not always been allowed into meetings of governing bodies. But a move toward a better informed citizenry about public policy decisions led states to enact open meetings laws in all 50 states by 1976. The laws generally don't guarantee a citizen's right to speak at a meeting, but they do guarantee access to the meetings by the media and public. Many states will consider violations of open meetings laws and issue penalties. In this 2005 photo, the South Dakota Open Meetings Commission consider complaint about violations of the state open meetings law in order to written decisions on four cases (AP Photo/Joe Kafka. Reprinted with permission from The Associated Press.)

Open meeting laws, also called sunshine laws, require that, with notable exceptions, most meetings of federal and state government agencies and regulatory bodies be open to the public, along with their decisions and records.

Although open meeting statutes are closely related to the Freedom of Information Act of 1966, no national minimum standard defines “openness,” and it is not mentioned in the First Amendment. Much of the litigation over open meeting laws has centered on whether particular exceptions justify closing certain meetings of government bodies.

Open meeting laws are a relatively new development. They ensure the public’s right to access to the internal workings of government at all levels. This “right” cannot be traced back to America’s common law tradition with England or to practices in place when the United States was founded.

Until the mid-1800s, sessions of the English Parliament were closed to the public, and attempts to publish its debates in the press were punishable offenses. In America, sessions of the Continental Congress and the Constitutional Convention were held in secret.

Although neither the Constitution nor the Bill of Rights requires public access to government meetings, the principle is entirely compatible with the concept of popular sovereignty and an informed citizenry. The freedoms of speech, the press, and the right to petition the government in the First Amendment all presuppose a “right to access.” To criticize or support a government policy effectively, citizens must be informed of the reasons for that policy.

All states had enacted open meetings laws by 1976

By 1976 all of the states and the District of Columbia had passed sunshine laws that created a legal right to (limited) access.

In general, most statutes require public bodies to meet and deliberate in public.

'Meeting' defined by number of participants and purpose

What constitutes a meeting is usually defined by its purpose — to perform public business (social gatherings are not considered meetings) — and the number of participants—a quorum or majority. All such meetings, unless specifically and legally exempted, are presumed to be open to the public, and agencies are required to give advance notice of the date, time, place, and agenda.

Exempted meetings are normally held in closed executive session and may be devoted to such things as personnel issues, ongoing investigations, collective bargaining, conferences with agency attorneys, the acquisition or sale of public property, or a debate among members of the agency prior to a decision.

Nevertheless, the agency must compile minutes or transcripts, and formal action must be taken in a public session. Both federal and state legislatures have the discretion to enact statutes to change or add exemptions at any time.

Faced with the technological advances of the information age and haphazard business practices, states are finding that they must reconsider their open meeting statutes.

Violations have ranged from conducting public business during innocent chance meetings to purposely bypassing the public notification requirement by using serial telephone calls or e-mails to speak with fellow board or agency members. In either case, technically the attendance requirement that triggers an open meeting is not present under most state laws, but the intent or spirit of the law is being ignored.

To clarify the meaning of “meeting” and to address today’s virtual or electronic communications capabilities, several states have relied on the analysis provided by the Washington state appeals court decision in Wood v. Battle Ground School District (2001).

It specifies that regardless of the setting, a meeting is defined by the intent and substance of the communication among public officials. If that intent is to discuss information and views or influence public business or policy, the communication becomes a meeting under the law and the provisions of the open meeting law apply.

If, however, the information is “passive,” with no real intent of influencing public policy, the communication does not trigger the legal requirement for an open meeting.

In the e-mail context, courts have focused on whether there was simultaneous communication akin to exchanges at a real-world meeting between officials.

For example, in Beck v. Shelton (Va. 2004), the Virginia Supreme Court determined that the exchange of e-mails between city council members and certain members-elect did not constitute a meeting because “the e-mails did not involve virtually simultaneous interaction.”

Today, in most states intent is central to determining the applicability of the open meeting statutes.