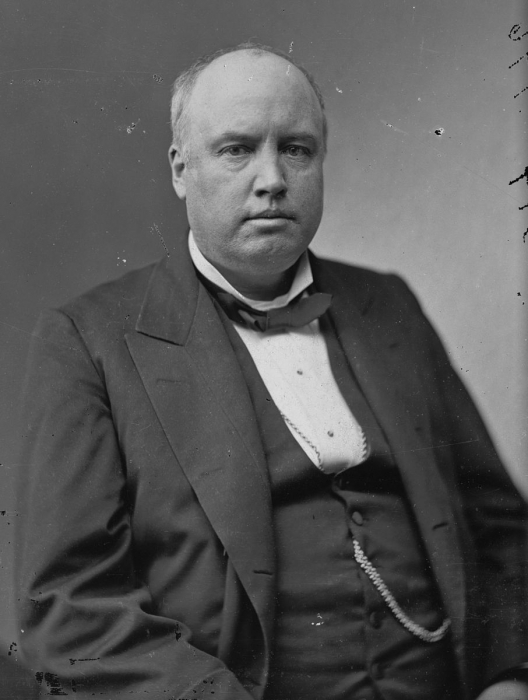 Robert Ingersoll (1833-1899) was a sought-after lecturer in the 1800s and a passionate defender of First Amendment rights. He particularly championed separation of church and state when others were arguing for a Christian amendment to the U.S. Constitution. (Photo from Library of Congress, dated between 1865 and 1880, public domain)

Robert Ingersoll (1833–1899), one of the 19th century’s most-sought-after lecturers, was a passionate defender of First Amendment principles, particularly in regard to the separation of church and state.

Ingersoll was born in Dresden, New York, the son of a Congregational minister whose wife died when Robert was two years old. After teaching for a time, he studied for the bar in Illinois. He was an early supporter of Abraham Lincoln and the Republican Party and fought in the Civil War. Ingersoll served as Illinois’ first attorney general and became a lecturer after it was clear that his freethinking was likely to block his way into higher political office.

At a time during which many Americans were calling for a Christian amendment to officially acknowledge God in the Constitution, Ingersoll argued in an oration on July 4, 1876, that one of the strengths of the United States was that “our fathers retired the gods from politics” (Page 2005: 21).

Ingersoll asserted that the founders “had the genius to know that no church should be allowed to have a sword; that it should be allowed only to exert its moral influence” (p. 22). He feared that a constitutional acknowledgment of God would require criminal prosecutions of those who were agnostics or atheists and observed that a similar acknowledgment in the Confederate Constitution had done nothing to protect it or to direct it toward justice.

He thought the existing practices of including “In God We Trust” on coins, having chaplains in the armed forces, and opening legislative proceedings with prayer were already “contrary to the genius of the Republic, contrary to the Declaration of Independence, and contrary really to the Constitution of the United States” (pp. 34–35).

He favored the complete “divorce of church and state” (p. 41). Favoring “liberty” for all men, women, and children, he praised “the doubters, the investigator, [and] the Infidel,” as “the saviors of liberty” (p. 69).

In 1887, Ingersoll attacked the blasphemy laws in New Jersey, defending a man who was ultimately convicted by a jury of blasphemy for publishing a pamphlet entitled “Blasphemy and the Bible” outlining his religious view as well as a satirical cartoon entitled “Casting pearls before swine.” Ingersoll argued that blasphemy was a remnant from past ages of ignorance and intolerance and enslaved the human mind.

Ingersoll advocated for the right to speak and 'liberty of mind'

Much like Voltaire and Thomas Paine, whom he admired, Ingersoll told an audience in 1888 that he was there “for the purpose of defending your right to differ with me.” He continued: “I want to convince you that you are . . . absolutely free to follow the torch of your reason according to your conscience; and I believe that you are civilized to that degree that you will extend to me the right that you claim for yourselves” (Page 2005: 98).

Ingersoll thought it was the height of impudence “to speak against the right to speak” and advocated “absolute liberty of mind” (pp. 103–105).

Ingersoll opposed tax exemptions for churches on the basis that lifting the tax burden from such property distributed it elsewhere. He thought the state, rather than churches, should be in charge of all charitable activities, and he opposed Sunday closing laws.