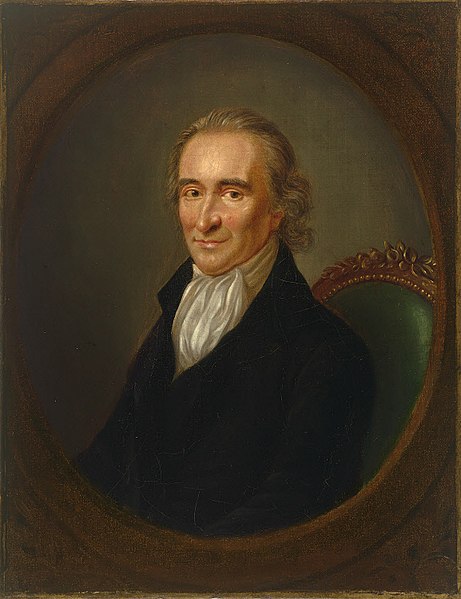 Thomas Paine (1737–1809), pamphleteer and revolutionary, is best remembered as the author of Common Sense (1776), an enormously popular and highly influential 47-page pamphlet that resonated across the land with its critique of King George III and hereditary succession and its call for American independence. (Painting by Laurent Dabos via National Portrait Gallery, public domain)

Thomas Paine (1737–1809), pamphleteer and revolutionary, is best remembered as the author of Common Sense (1776), an enormously popular and highly influential 47-page pamphlet that resonated across the land with its critique of King George III and hereditary succession and its call for American independence. Alongside his justification for the colonists’ separation from England, Paine suggests that the rule of law should replace the rule of king. Paine’s “hints” for organizing an independent government include reverence for a written charter that would emphasize individual liberty, including the free exercise of religion.

Born to a Quaker father and Anglican mother in Thetford, England, Paine worked variously as a corset-maker, excise-tax collector, seaman, and shopkeeper before departing for the colonies. Arriving in Philadelphia in 1774 with a letter of introduction from Benjamin Franklin, Paine began a career in journalism as editor of The Philadelphia Magazine. Paine’s literary style bridged the gap between the political elite of the era and the colonial everyman. The power of his ideas coupled with the accessibility of his writing account in part for the success and influence of Common Sense. Just nine months after the battles of Lexington and Concord, Paine was assuring Americans that “we have it in our power to begin the world over again” and serve as a model for world citizenship, commerce, and peace.

Paine charged with libel in England; imprisoned in France

Although Paine wrote another series of influential papers under the title American Crisis during the Revolution, his common-man, radical, and egalitarian sentiments (which included opposition to slavery and support for women’s rights) brought him enemies in his adopted land. In April 1787, he departed the United States for Europe, where he intended to raise funds to build an iron bridge he had previously patented. This fund-raising expedition turned into a 15-year sojourn.

While traveling between England and France, Paine responded to Edmund Burke’s critique of the French Revolution, which had begun in 1789, by publishing Rights of Man (1791, 1792). The popular success of this work met with charges of seditious libel from English authorities, forcing Paine to flee to France to avoid arrest. Paine received a hero’s welcome in France, where he was elected as a representative to the new National Convention. When Paine opposed the death penalty for Louis XVI, however, he was imprisoned and barely escaped execution himself.

Paine's writings were misunderstood in his day

Released the next year, Paine produced Age of Reason (1794, 1796), a two-part critique of Christianity and religion. This was followed in 1797 by another controversial work, Agrarian Justice, considered a seminal text for the workers’ movement and the welfare state. Maligned and misunderstood in his own day, it was noted at his death that just six mourners attended the funeral of this citizen of the world who wrote so eloquently about rejecting injustice and pursuing limited government and personal liberty.

This article was originally published in 2009. Norman Provizer, Ph.D., is a professor of political science at the Metropolitan State University of Denver and the founder and director of the Golda Meir Center for Political Leadership. He is the co-editor of three books on the Supreme Court and Constitutional Law.