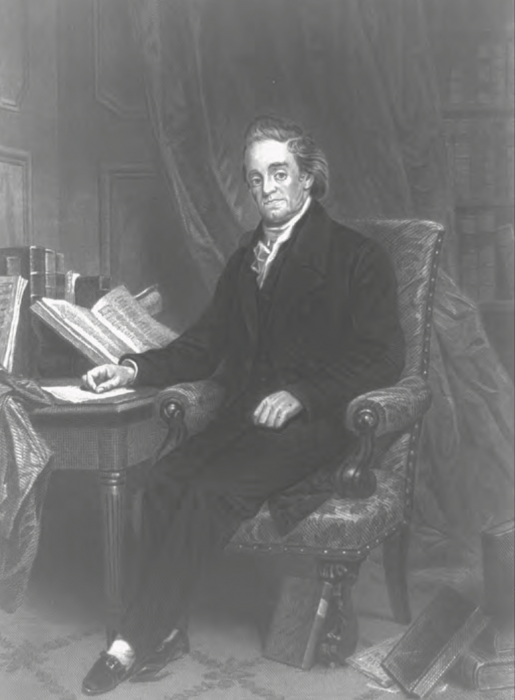 American Dictionary creator Noah Webster did not support the adoption of the Bill of Rights because he thought the proposed amendments, including the First Amendment, would give citizens the power to act lawlessly. (Image via Library of Congress, public domain)

Born in West Hartford, Connecticut, Webster earned undergraduate and master’s degrees from Yale University, taught school, and then studied law at Litchfield Law School in Connecticut. Although he practiced law for some time, he became best known for his writings, which began with a speller, a grammar, and a reader for school students and culminated in 1828 with the publication of his 70,000-word American Dictionary of the English Language. In addition to writing many other books, Webster edited a number of influential newspapers; worked for a variety of social reforms, including the abolition of slavery; and published a revised edition of the Bible in 1833.

In 1785 Webster penned a series of four essays called Sketches of American Policy, which pointed out the weaknesses of the existing Articles of Confederation and called for a new government, attacking the idea that states could retain their sovereignty and continue to act as a nation. Teaching school in Philadelphia at the time of the Constitutional Convention of 1787, Webster, although not one of the 55 delegates, was known by many of the delegates, and he dined with them frequently.

Webster had already toured states throughout the nation to secure copyright protection for his books. He is often called the “father of American copyright” for these efforts and for the role he is believed to have had on convention delegates in vesting power over such copyrights in Congress. He helped persuade Congress to adopt the first copyright law and later successfully lobbied for further legislation on the subject.

Webster did not think the Bill of Rights was necessary

Although he wrote essays favoring ratification of the new Constitution, Webster did not think a bill of rights was necessary. It seems particularly odd that a journalist would oppose a national amendment protecting freedom of the press, but Webster did. In his “Reply to the Pennsylvania Minority: ‘America,’” which he published in the New York Daily Advertiser on December 31, 1787, he sought to explain his position:

“But if you attempt to define the liberty of the Press, and ascertain what cases shall fall within that privilege, during the course of centuries, where will you begin? Or rather, where will you end? Here, Gentlemen, you will be puzzled. Some publications certainly may be a breach of civil law. . . . Admit that principle; and unless you can define precisely the cases, which Are, and are not a breach of law, you have no right to say, the liberty of The Press shall not be restrained; for such a license would warrant any breach of law. Rather than hazard such an abuse of privilege, is it not better to leave the right altogether with your rulers and your posterity?” (Bailyn I, 556).

Webster was a Federalist, supported Alien and Sedition Acts

Webster went on to become an ardent member of the Federalist Party. As such, he supported the Alien and Sedition Acts of 1798, the latter of which made it a federal crime to print libelous criticism of governmental officials. Deeply disturbed by supporters of the French Revolution in the United States, Webster argued that “[t]he falsehoods and calumny propagated by means of public papers have been the direct and principal means of all the civil dissensions which distract this country and have threatened it with civil war.” Webster appears to have helped persuade Secretary of State Timothy Pickering to launch prosecutions against leading critics of the government (Unger 1998: 232–233).

A loyal Federalist to the end, Webster later supported the Hartford Convention, a gathering of New England Federalists who opposed the War of 1812 and considered secession. He remains best known, however, for furthering a distinctive American brand of the English language and for uniting pupils around common readings on American history.