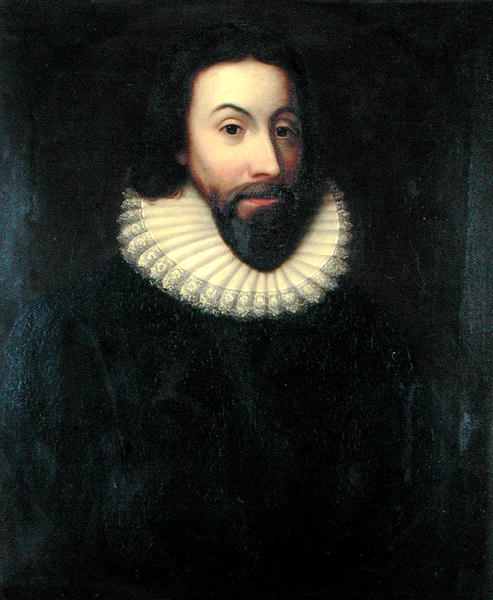 John Winthrop (1588–1649) was an early Puritan leader whose vision for a godly commonwealth created the basis for an established religion that remained in place in Massachusetts until well after adoption of the First Amendment. It was, however, eventually superseded by ideas of separation of church and state. (Image via Wikimedia Commons, painted by Charles Osgood 1834, public domain)

John Winthrop (1588–1649) was an early Puritan leader whose vision for a godly commonwealth created the basis for an established religion that remained in place in Massachusetts until well after adoption of the First Amendment. It was, however, eventually superseded by ideas of separation of church and state.

Winthrop was governor of the Massachusetts colony

Born in Edwardstone, Suffolk, England, the son of a lord, Winthrop attended Trinity College and later received legal training at Gray’s Inn. He was rising in English legal circles when he decided to settle in America, where he hoped Puritanism, the reformed Protestantism that he embraced, could flourish. Winthrop emigrated in 1630 and would serve many terms as governor of Massachusetts, in which capacity he exercised generally good judgment that helped the colony through its early perilous years.

Winthrop’s sermon entitled “A Modell of Christian Charity,” which he delivered around the time that his ship landed in Massachusetts, is famous for his allusion to how Massachusetts would be “a Citty [sic] upon a Hill.” Although this imagery has subsequently been connected to later American expansionism and exceptionalism, Winthrop appears to have used the image primarily to implore the colonists to live honorably and piously, because a watching world would take notice of how the Massachusetts experiment went and would project its judgment onto its religious beliefs.

Winthrop helped to establish a commonwealth where voting was limited to male church members and he generally favored rule by an aristocratic elite, subject to some democratic control. Like fellow Puritans, Winthrop did not believe it was possible to separate church and state; the state was responsible for enforcing provisions against Sabbath-breaking, blasphemy, and the like.

Winthrop resisted the extreme separatism initially advocated by Roger Williams, as well as Williams’s ultimate universalism. Winthrop appears, however, to have passed information on to Williams that enabled him to escape to a neighboring colony rather than face deportation to England for his perceived heresies.

Winthrop faced a tougher challenge against Anne Hutchinson, who began leading Bible studies in her home. Like Williams, she thought that many Puritan ministers — she singled out all but John Cotton and her brother-in-law, John Wheelwright — were under the covenant of works rather than the covenant of grace. She appeared to be advocating a form of Antinomianism, nihilistic lawlessness, by suggesting that outward works were no measure of inner piety. Combined with her penchant for basing her teachings on her own direct revelations rather than on the Scriptures, she posed a threat to colonial government that was met with her banishment, with Winthrop serving as one of her judges.

Although moderated by his own judicious temperament, Winthrop pronounced similar sentences against Anabaptists, who opposed infant baptism and who argued, as had Williams, that the state should not enforce laws relative to man’s duties to God. Winthrop’s importance has been enhanced by the posthumous publications of his journals that detail many of the events of New England until his own death in 1649.