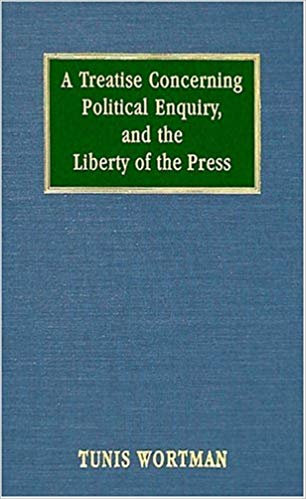 New York lawyer Tunis Wortman, whose date of birth is unknown but is known to have died in 1822, authored A Treatise Concerning Political Enquiry, and the Liberty of the Press in 1800. Much as John Stuart Mill would do in England, Wortman attempted to portray freedom of the press as an engine for human progress. (Book cover via Amazon)

New York lawyer Tunis Wortman, whose date of birth is unknown but is known to have died in 1822, authored A Treatise Concerning Political Enquiry, and the Liberty of the Press in 1800. Robert W. T. Martin has described this text as “the most articulate exposition of the modern concept of press liberty to emerge in the aftermath of the Sedition Act.” Although Wortman’s work may have been occasioned by his opposition to the Sedition Act of 1798, it is notable for attempting to put the controversy within a larger context. Much as John Stuart Mill would do in England, Wortman attempted to portray freedom of the press as an engine for human progress.

Wortman had faith in the power of truth in self-governing

Wortman took a very democratic view of the capacity of the people for self-government: all humans were not equally gifted with genius, but all had a “moral sense.” All governments ultimately depend upon public opinion. Despots attempt to use the ignorance of the people to perpetuate further ignorance, and the only way to enlightenment is to spread information and argument.

Wortman had great faith in the power of truth. He observed “that diversity of sentiment . . . is far from being unfavorable to the eventual reception of Truth,” and further explained, “It produces Collision, engenders Argument, and affords exercise and energy to the intellectual powers; it corrects our errors, removes our prejudices, and strengthens our perceptions; it compels us to seek for the evidences of our knowledge, and habituates us to a frequent revisal of our sentiments.” Wortman later noted, “Society should constitute an University of Politics, open to the instruction of each of its members.”

Wortman wrote that although democratic governments are based on the idea that rulers represent their citizens, their actions are subject to the censure of the people. Without such a power, the only other alternative would be that of violent revolution. Governments that attempt to suppress licentiousness show a lack of faith in their own people: coercive laws might punish, but they would not persuade critics. He argued, “Public prosecutions for libels are, therefore, more dangerous to Society than the misrepresentation which they are intended to punish,” and he proclaimed, “Licentiousness is an evil infinitely less formidable than Restriction.”

Wortman said Congress did not have authority over libel

Specifically examining the provisions within the U.S. Constitution, Wortman denied that they included legislative authority over libel. He interpreted the provisions of the First Amendment as being “of a nature altogether negative.” As he observed, “[I]t is exclusively the intention of the articles of amendment to furnish additional securities to Public Liberty, and not to confer additional powers on Congress.” In arguments similar to those that James Madison had advanced in the Virginia Report of 1800, Wortman also denied that there was any federal common law.

In contrast to Federalist arguments that put forth that libel consisted only in prior licensing and to English arguments that “the greater the truth, the greater was the libel,” Wortman maintained, “Truth can never be a Libel. The system which maintains so odious a proposition, is founded in the most palpable injustice.” Governments should limit themselves to combating “open disorder” and allow speech and press to be free.

Mere freedom from prior restraint was inadequate: “Of what use is the liberty of doing that for which I am punishable afterwards?” Wortman was, however, prepared to allow public officials to take libelers to court as long as they were “placed upon the same footing with a private individual.”