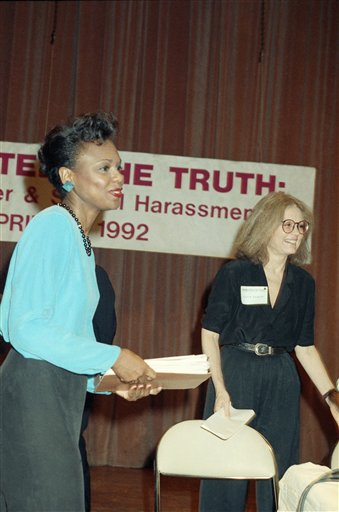 The creation of a hostile work environment through sexual comments is a type of sexual harassment that may implicate First Amendment free speech freedoms. In this photo, two well-known women who have spoken about sexual harassment in the workplace, Anita Hill, left, and Gloria Steinem are together at Hunter College in New York in 1992 for a conference on "Parity, Power and Sexual Harassment." The keynote address was given by Hill who testified at Senate confirmation hearings for Supreme Court Justice Clarence Thomas that she had been sexually harassed by Thomas when she worked for him. (AP Photo/Chrystyna Czajkowsky, used with permission from the Associated Press)

Efforts to address and eliminate sexual harassment in the workplace sometimes result in tension between the demands of the equal protection clause of the Fourteenth Amendment to eliminate discrimination and the First Amendment free speech rights of individuals at work.

This situation has led some observers to argue that the enforcement of sexual harassment laws has resulted in censorship through political correctness.

In Meritor Savings Bank, FSB v. Vinson (1986), the Supreme Court declared sexual harassment to be a form of sex discrimination under Title VII of the Civil Rights Act of 1964.

First, sexual harassment is unwanted sexual advances or requests for sexual favors linked to an individual’s employment. Under this definition, a demand that one provide sexual favors or face termination is a clear instance of quid pro quo sexual discrimination. The same would be true if sexual demands were made as a condition of being hired or promoted. These instances do not implicate the First Amendment.

The second EEOC definition of sexual harassment is a situation in which sexual advances or comments unreasonably interfere with an individual’s work performance such that it creates an intimidating, hostile, or offensive work environment. Under this hostile environment test, a person may be able to claim sexual harassment even if he or she is not sexually propositioned; for instance, a workplace may qualify as hostile if it includes language, pictures, or behavior that are sexual in nature and interfere with performance.

It held that this type of speech was not protected because it constituted discriminatory conduct. In addition, the court noted that speech has never been given absolute protection in the workplace, and given that employees are a captive audience while at work, efforts to limit sexually charged speech are reasonable time, place, and manner restrictions.

Other courts have effectively followed the arguments made in Jacksonville Shipyards, finding that certain forms of sexual communication in the workplace are not protected speech and constitute a form of discriminatory conduct. Although some critics of this decision and sexual harassment law contend that efforts to root out discrimination have produced a PC work atmosphere, others contend that the efforts to balance speech and conduct have properly sided with victims from unwanted sexual intimidation.