By Jane E. Kirtley (Updated 2020)
Other articles in Categories of Laws and Proposed Laws, Freedom of the Press issues and topics 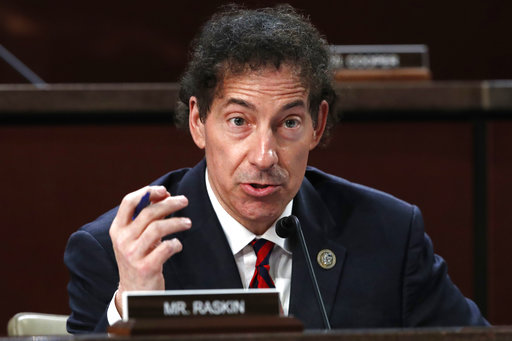 U.S. Rep. Jamie Raskin, pictured here, and others, including U.S. Rep. Jim Jordan, R-Ohio, renewed efforts for a federal shield law in 2017, called the Free Flow of Information Act. The bill was never passed. Shield laws, which exist in nearly every state, protect journalists from being forced to divulge sources in court or to Congress except under certain limited circumstances. (AP Photo/Jacquelyn Martin, with permission from the Associated Press)

Shield laws are statutes that provide journalists either an absolute or qualified privilege to refuse to disclose sources used or information obtained in the course of news gathering.

There is no federal shield law

As of 2018, 49 states and the District of Columbia had enacted some form of shield law. Congress has attempted to pass a federal shield law since 2005, named the Free Flow of Information Act.

In 2017, efforts were renewed with another bill, co-sponsored by U.S. Rep. Jamie Raskin, D-Maryland and U.S. Rep. Jim Jordan, R-Ohio. However, the bill was never passed.

In Branzburg v. Hayes (1972), the Supreme Court declined to recognize a constitutional privilege excusing journalists called to testify before a grand jury.

The high court made clear that the state legislatures, like the state courts, were free, “within First Amendment limits, to fashion their own standards” regarding a reporter’s privilege. Seventeen states already had statutory shield laws in place at the time Branzburg was decided. In California, the shield law is included in the state constitution.

Shield laws usually provide either an absolute or qualified privilege, although California’s statute has been interpreted to create immunity against a finding of contempt rather than a privilege per se. Privileges may extend to sources, information, or both. Some statutes specify that privileges apply to proceedings before the executive and legislative branches, as well as to judicial proceedings.

The exact conditions under which a claim of qualified privilege may be superseded vary, but in general, states have adopted some version of the multi-part test proposed by Justice Potter Stewart in his dissent in Branzburg.

Typically, a shield law requires that the party seeking a journalist’s testimony demonstrate that the information sought is relevant, material, and unobtainable from an alternative source. Some statutes specify which actions constitute a waiver of privilege; for example, prior disclosure or publication of the requested information will null the privilege.

Some shield laws carve out other exceptions. For example, the Minnesota Free Flow of Information Act declares that the privilege does not apply in libel actions where the party seeking disclosure can demonstrate that the identity of a source will lead to relevant evidence on the issue of actual malice. But even in those cases, disclosure will not be compelled without a showing that the information cannot be obtained through other means.

Shield laws may define who qualifies as journalist

Statutes may include detailed definitions of who qualifies as a “journalist.”

Qualification typically focuses on traditional reporting, writing, and editing activities. Statutes may also enumerate exactly what types of media outlets are covered. For example, in Alabama journalists working for newspapers and radio and television stations are protected, but those working for magazines are not. Some statutes require that the journalist engage in news-gathering activities for monetary gain, which can exclude bloggers or student journalists from the privilege.

For their part, journalists claim that allowing a legislature to define the scope of the privilege is tantamount to licensing the press.

Statutes may be imprecisely drafted, and even an absolute shield law may yield in cases where a competing constitutional interest, such as a criminal defendant’s Sixth Amendment right to a fair trial, is asserted. Nevertheless, because recent cases have questioned the existence of any constitutional privilege, a legislative approach may provide the clearest protection for journalists.

This article was originally published in 2009 and updated in 2020. Jane E. Kirtley is the Silha Professor of Media Ethics and Law at the Hubbard School of Journalism and Mass Communication, University of Minnesota, where she also directs the Silha Center for the Study of Media Ethics and Law. From 1985-1999, she was the Executive Director of the Reporters Committee for Freedom of the Press. She is the author of the Media Law Handbook published by the U.S. State Department.