Government in the Sunshine Act (1976)

By Brandi M. Snow
Other articles in Freedom of the Press issues and topics, Laws and Proposed Laws, 1951-2007 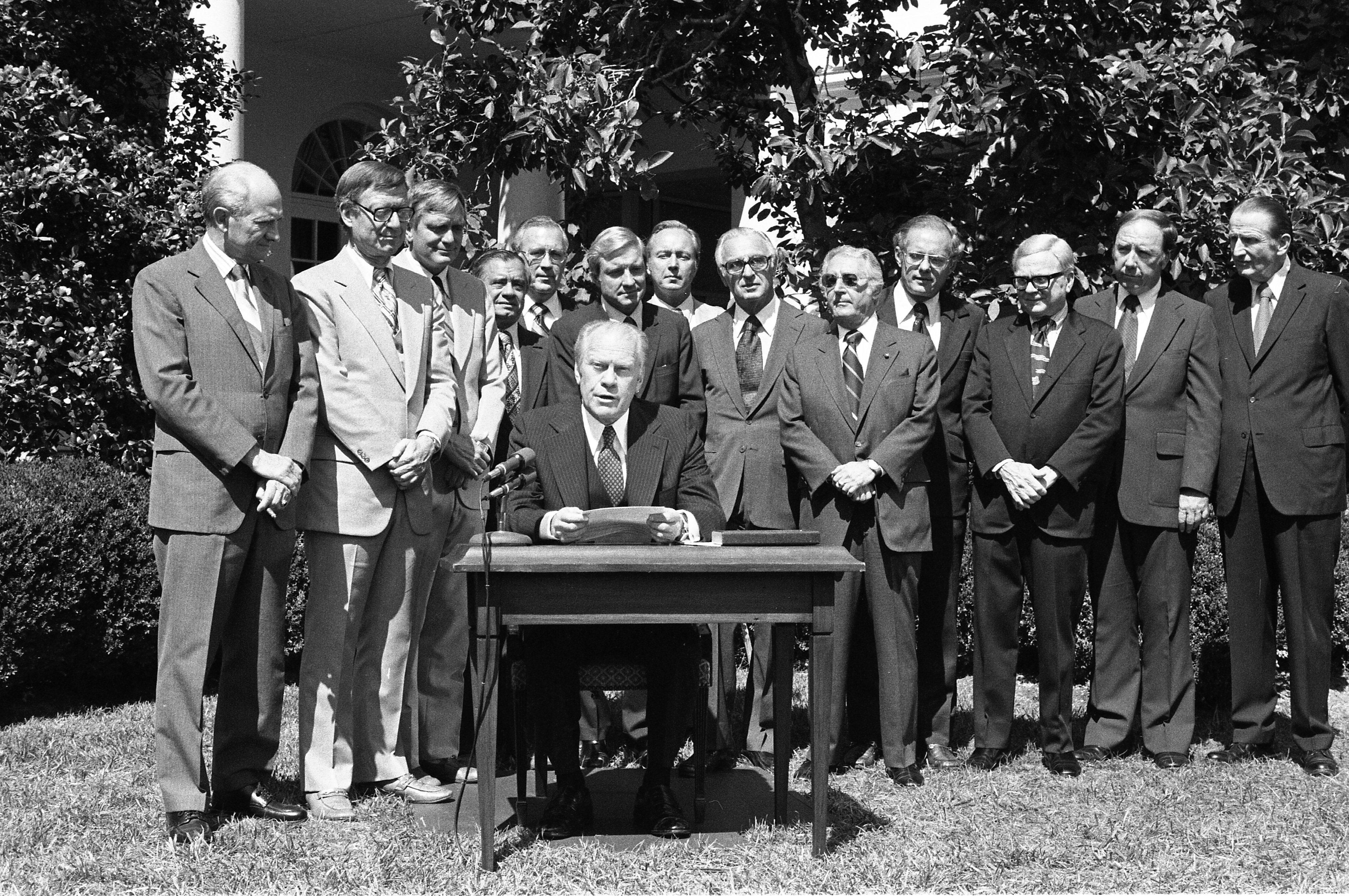 President Gerald Ford and several of members of Congress at the signing ceremony for the Government in the Sunshine Act in the White House Rose Garden, September 13, 1976. The Sunshine Act occurred in response to an outcry for increased government transparency and accountability following the Watergate scandal. Its primary function is to ensure that decisions that affect the public are open and accessible to the public. (Photo via National Archive Catalog, public domain)

Passage of the Government in the Sunshine Act of 1976, typically referred to as the Sunshine Act, occurred at a time in U.S. history when the Watergate scandal had caused an outcry for increased government transparency and accountability.

Also known as the Open Meetings Act, its primary function is to ensure that decisions regarding the federal government that affect the public are open and accessible to the public.

The Sunshine Act states that “every portion of every meeting of an agency shall be open to public observation.” This mandate applies to the collegial bodies that head up federal government agencies.

Not only must the meeting be open, but the agency must also give notice of the meeting and its agenda no later than one week before the date of the meeting. Once this notice is disseminated, only very narrow circumstances permit for changes. With the notice, the agency is required to provide the name and phone number of an official designated to answer requests for information about the meeting. Upon passage of the act, each government agency was required to promulgate a set of regulations by which to implement the act’s provisions.

Some meetings can be closed if they fall within 10 exemptions

The act recognizes that there are circumstances under which open meetings do not serve the public good. Ten exemptions from the requirements of the act exist. Examples of exemptions include circumstances in which information disclosed will reveal trade secrets or when the content of a meeting is likely to lead to accusations of criminal behavior, constitute an unwarranted invasion of personal privacy, or endanger the safety of law enforcement personnel.

Transcripts of closed meetings must be accessible to the public

Once a meeting has been closed, the act requires the agency to keep a transcript, recording, or minutes of the closed meeting, and to make it promptly available in a place easily accessible to the public. Only those portions of the meeting that specifically fall under one of the ten exemptions may be excluded from the transcript. The full transcript, including that part closed to the public, must be maintained by the agency for at least two years after the date of the meeting, or one year after the conclusion of the agency’s proceedings on the issue involved, whichever is the longer period of time.

Each of the 50 states has enacted a Sunshine or Open Meetings Act governing its own agencies.

Some of these state laws predate the federal law: California’s Brown Act was enacted in 1953. Other state sunshine laws are much more recent; some were enacted only after passage of the federal law. While language varies from state to state, particularly with regard to listed exemptions, the provisions of state acts are similar to those of the federal act.

Notable differences include jurisdiction for challenges, specific requirements for notice of meetings, and procedures and reasons for closed meetings.

The Sunshine Act provides that jurisdiction is given to the federal district courts to enforce its requirements.

State acts, of course, give jurisdiction to their state or chancery courts.

While use of the act’s exemptions to close meetings has been challenged, it is actually the definition section at the beginning of the statute that has given rise to the most contentious legal actions. The issue arising there concerns which types of meetings are (and are not) subject to the act in the first place.

The act defines a meeting as “deliberations” of at least the number of members needed to take action on behalf of the agency “where such deliberations determine or result in the joint conduct or disposition of official agency business.”

Not surprisingly, much has been made — primarily in the opinions of attorney generals — of the many possible readings of the definitions section. In particular, the questions of what constitutes “deliberation” and how can the “result” of such a meeting can be determined by an objective review offer fodder for controversy.

Courts have ruled on definition of 'meeting'

Significant cases have helped define the terms, including FCC v. ITT World Communications, Inc. (1984), in which the Supreme Court ruled that the Government in Sunshine Act applies only where a subdivision of an agency deliberates upon matters that are within that subdivision's formally delegated authority to take official action for the agency. In another case, Natural Resources Defense Council, Inc. v. Nuclear Regulatory Commission (2000), the D.C. Circuit Court of Appeals held that the commission's definition of "meeting" under its own rules was valid because it relied on the Supreme Court's interpretation in the ITT case.

The federal government in the Sunshine Act, like its state-enacted cousins and the federal Freedom of Information Act of 1966, has successfully raised the level of transparency and accountability in the decision-making of the collegial bodies of government agencies. Nevertheless, much remains to be determined concerning the scope of its many exemptions.