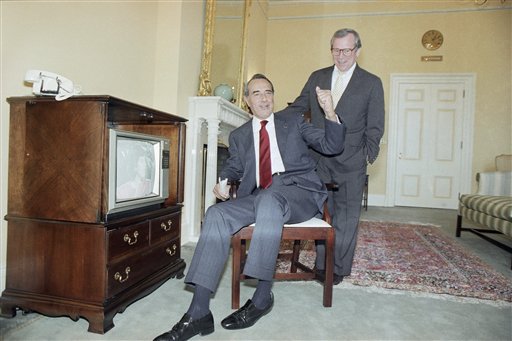 The Cable Satellite Public Affairs Network, or C-SPAN, a nonprofit company with the stated mission of providing public access to the political process, makes it possible for the public to view firsthand congressional floor debates and committee meetings, opportunities that Congress had long attempted to stifle. In this photo, Senate Majority Leader Sen. Robert Dole, R-Kan., seated, and former Sen. Howard Baker of Tenn., watch C-Span television, Monday, June 2, 1986 in Washington just prior to the first live television broadcast of proceedings on the Senate Floor. (AP Photo/Lana Harris, used with permission from the Associated Press)

The Cable Satellite Public Affairs Network, or C-SPAN, a nonprofit company with the stated mission of providing public access to the political process, makes it possible for the public to view firsthand congressional floor debates and committee meetings, opportunities that Congress had long attempted to stifle.

Founded in the 1970s by Brian Lamb, C-SPAN operates from profits generated by the cable industry rather than from tax monies.

After the opening of the Eightieth Congress was televised in 1947, TV coverage was limited for decades to occasional big events, including the 1951 Kefauver Commission hearings on organized crime and the 1954 Army-McCarthy hearings.

It was not until 1970 that congressional committees were permitted to set their own rules for televised coverage. That change in the rules paved the way for the commercial networks to provide gavel-to-gavel airings of the Senate Watergate Committee and the House Judiciary Committee hearings on the impeachment of President Richard M. Nixon in 1973.

The momentum of those hearings helped make House Speaker Thomas P. “Tip” O’Neill Jr. amenable to the creation of some means of getting representatives’ words back to their home districts in full context instead of in truncated sound bites.

Brian Lamb, then Washington bureau chief of Cablevision magazine, used his contacts to approach cable TV insiders and politicians about the concept of airing House activities on cable stations nationwide. Although the new channel would air no advertising, and would be paid for by the cable industry, cable operators were persuaded that performing such a public service would solidify the fledgling industry’s credibility with viewers and improve its contacts with the federal government.

C-SPAN began airing floor activities of the House of Representatives in 1979.

The Senate was a tougher sell, with coverage coming after Robert C. Byrd, D-W.Va., the Senate minority leader, was introduced as the Speaker of the House on a trip back home.

That mistake helped convince Byrd that the Senate needed television coverage if only to make sure the House did not become the more visible chamber. In 1986 the Senate voted to allow cable coverage, and C- SPAN II was born.

Since then, the network also has launched C-SPAN III, C-SPAN Radio, and www.c-span.org, which provides streaming audio and video. In addition to House and Senate coverage, programming now includes viewer call-in shows, interviews with authors, and a program about the judicial system, although the Supreme Court continues to reject C-SPAN’s requests for television access to its proceedings.

Since C-SPAN’s inception, the House and Senate have controlled the camera angles in Congress. Consequently, the network’s reputation for objective, neutral coverage came under fire in the 1980s because of the way the cameras were used.

As Republican conservatives in the House came to dominate special order speeches, given at the end of the day’s legislative business, the Democratic majority attempted to embarrass the opposition by directing camera operators to pan the chamber, showing it to be virtually empty.

This practice continued until 1994, when House rules were changed to require the parties to take turns in taking the floor first during special orders and to limit the time spent on them.