By Douglas C. Dow
Other articles in Issues Related to Speech, Press, Assembly, or Petition 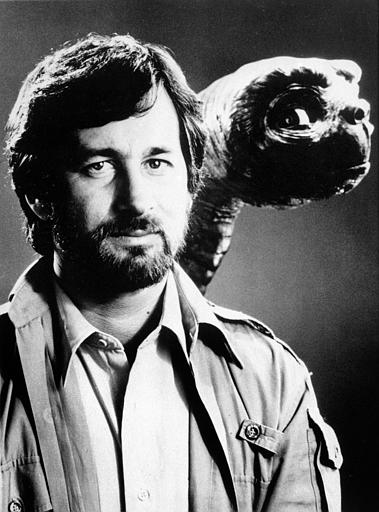 The First Amendment limits the degree to which governments can censor or ban movies. In 1968 the Motion Picture Association of America (MPAA) established a system of movie ratings for parents to use as a guide to determine the appropriateness of a film’s content for children and teenagers. The ratings system is voluntary, and there is no legal requirement that filmmakers submit their films for rating. Director Steven Spielberg was responsible for the PG-13 after his movies Jaws and Indiana Jones and the Temple of Doom were rated PG. Spielberg felt that the PG rating was too broad for the violence in these movies and suggested a PG-14 rating. In this photo, Spielberg poses with alien character E.T. in London, Dec. 1982. (AP Photo/Press Association, used with permission from the Associated Press)

The First Amendment limits the degree to which governments can censor or ban movies. In 1968 the Motion Picture Association of America (MPAA) established a system of movie ratings for parents to use as a guide to determine the appropriateness of a film’s content for children and teenagers. The ratings system is voluntary, and there is no legal requirement that filmmakers submit their films for rating. However, there are potentially significant economic sanctions for those filmmakers unwilling to accept the ratings system. For example, many theater chains will not run films without ratings, and numerous publications will not run ads for unrated films.

The MPAA rating system replaced the older Hay’s Production Code, used from the 1930s through 1966, in which the U.S. motion picture industry had adopted a policy of self-censorship. The Production Code listed specifics about what would not be permitted in films and a vague imperative that films should not lower the moral standards of viewers.

There were several reasons why the Production Code was replaced, including a 1968 opinion in Interstate Circuit, Inc. v Dallas, in which the Supreme Court forbade local governments from banning movies shown to adults but permitted officials to pass laws preventing children from being exposed to certain material. In addition, as the hierarchical studio system died, studios executives lost their iron grip over the content of films, which made the Production Code unenforceable. Finally, the social norms of the 1960s allowed for more candid depictions of adult matter, and during this period there was a greater acceptance of more explicit degrees of nudity, sexuality, and violence.

The new ratings system began with four categories: G (general audiences), M (mature audiences, changed in 1969 to PG, parental guidance suggested), R (restricted, no children under 17 allowed without parents or adult guardians), and X (no one under 17 admitted). The ratings were revised several times over the years, to include in 1984 a new PG-13 label, and in 1990 a new NC-17 rating (which stands for no one 17 and under admitted). The NC-17 rating replaced the X rating, which came to signify pornography.

MPAA Board has been mired in controversy

Since its inception, the Ratings Board of the MPAA—an eleven-member board made up of parents who are not employed by the entertainment industry—has been mired in controversy. The board has been accused of being more lenient to major studios, granting them more acceptable ratings compared to those given to independent and foreign films. The board is charged with considering a given film in its entirety, rather than taking questionable scenes out of context, but additional charges have been made that the Ratings Board looks more harshly on individual depictions of sexuality and nudity than on violence. There is an appeals system for studios who want to contest a rating.