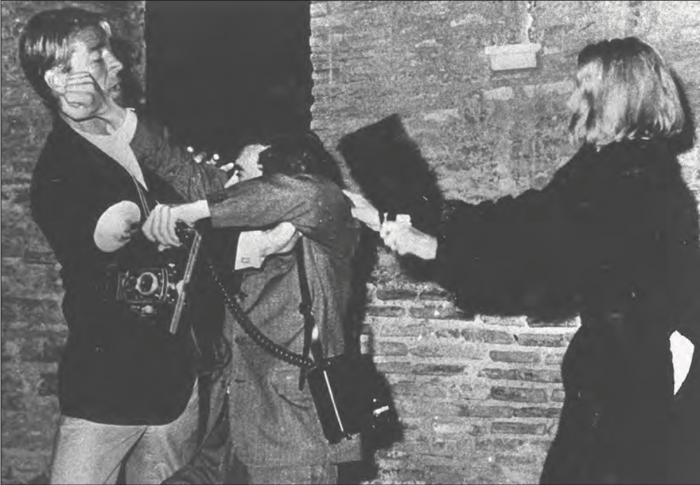 Paparazzi are freelance photographers known for their relentless pursuit of photographs of famous persons. ”The intrusive newsgathering activities of paparazzi have led to cries of invasion of privacy by celebrities, and legislation has been designed to control their activities. Such legislation represents a collision between individual privacy rights and First Amendment free press rights.In this mid-1960s photo, the "king" of Italian paparazzis, Rino Barillari, at center, scuffles with Jayne Mansfield's husband, American actor Mickey Hargitay, as top-model Vatussa Vitta attacks him with her handbag, after Barillari had taken pictures of the couple downtown Rome's historic Via Veneto. (AP Photo/HO, used with permission from the Associated Press)

Paparazzi are freelance photographers known for their relentless pursuit of photographs of famous persons. In Galella v. Onassis (2d Cir. 1973) a federal appeals court defined paparazzo as “literally a kind of annoying insect, perhaps roughly equivalent to the English ‘gadfly.’ ”The intrusive newsgathering activities of paparazzi have led to cries of invasion of privacy by celebrities, and legislation has been designed to control their activities. Such legislation represents a collision between individual privacy rights and First Amendment free press rights.

Galella was most famous paparazzo

Perhaps the most famous paparazzo was Ronald Galella, best known for his pursuit of Jackie Onassis and her children. In 1973, the Second Circuit modified but upheld an injunction against Galella, who went to ridiculous lengths to obtain close photographs of the former first lady. The appeals court in Galella reasoned that “Galella’s action went far beyond the reasonable bounds of news gathering.”

In 1997 international outrage followed the death of England’s Princess Diana from a car crash in which paparazzi allegedly followed the car driven by her chauffeur.

In the United States, calls to regulate the paparazzi through legislation intensified at both the federal and state level, and several bills were introduced in Congress. Two such measures were the Protection from Personal Intrusion Act and the Privacy Protection Act of 1998. These laws stipulated criminal penalties for paparazzi if their conduct caused physical harm. For example, the Personal Intrusion Act, which was introduced by the late Sonny Bono, included a prison term of up to twenty years if the conduct of the paparazzi led to death. Both measures were referred to the House Judiciary Committee but never made it out of committee.

California passed a law to protect public persons from paparazzi

“A person is liable for constructive invasion of privacy when the defendant attempts to capture, in a manner that is offensive to a reasonable person, any type of visual image, sound recording, or other physical impression of the plaintiff engaging in a personal or familial activity under circumstances in which the plaintiff had a reasonable expectation of privacy, through the use of a visual or auditory enhancing device, regardless of whether there is a physical trespass, if this image, sound recording, or other physical impression could not have been achieved without a trespass unless the visual or auditory enhancing device was used.”

In 2006 the California legislature amended the law to provide that those who face such invasions of privacy can sue the paparazzi for “three times the amount of any general or special damages” caused by their conduct. Given the astronomically high-dollar demand for photos of celebrities, it is likely that the legislation will be tested in the courts in the near future with cases involving a charged paparazzo.