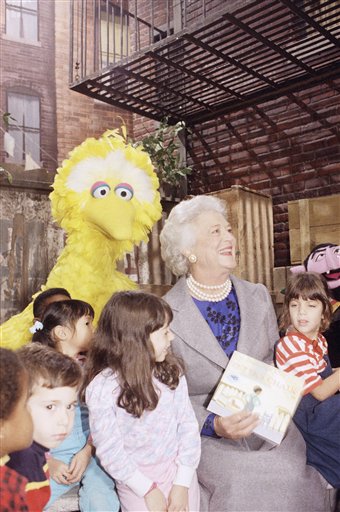 Like public radio, American public television is premised on the idea that stations should be independently owned and operated to further the full exercise of First Amendment freedoms. At the White House signing ceremony for the Public Broadcasting Act of 1967, President Lyndon B. Johnson said, “At its best, public television would help make our nation a replica of the old Greek marketplace, where public affairs took place in view of all the citizens. But in weak or even in irresponsible hands, it could generate controversy without understanding; it could mislead as well as teach.” In this photo, first lady Barbara Bush chats with Big Bird and several children while taping a special segment of PBS' "Sesame Street" for its 21st season, Oct. 19, 1989 at the Children's Television Workshop in New York. Sesame Street is a popular public television children’s show. (AP Photo/Mark Lennihan, used with permission from the Associated Press)

Like public radio, American public television is premised on the idea that stations should be independently owned and operated to further the full exercise of First Amendment freedoms. At the White House signing ceremony for the Public Broadcasting Act of 1967, President Lyndon B. Johnson said, “At its best, public television would help make our nation a replica of the old Greek marketplace, where public affairs took place in view of all the citizens. But in weak or even in irresponsible hands, it could generate controversy without understanding; it could mislead as well as teach.”

Public television has been a target of criticism

Programming on public television has been a target of criticism since its inception. Bill Moyers, a former assistant to President Johnson and a veteran of public television, said the Corporation for Public Broadcasting (CPB) was established “to set broad policy for public broadcasting and to be a firewall betweeen political influence and program content.” Recurring threats of reduced federal funding and allegations of editorial bias have threatened that firewall, however.

Early on, such edgy programs such as The Great American Dream Machine, a satirical magazine series, and VD Blues, a frank look at venereal disease in an era when the subject was usually discussed only in doctors’ offices, angered White House operatives who thought public television had gone too far. In 1972 President Richard M. Nixon vetoed a two-year funding measure for public television and radio. In protest, CPB president and former Republican representative Thomas Curtis and several board members resigned. Nixon then appointed board members who directed monies to high-culture, politically uncontroversial programs.

Ironically, public television’s gavel-to-gavel coverage of the Senate and House committee hearings into the Watergate scandal that led to Nixon’s 1974 resignation galvanized the viewing audience. Public broadcasting’s commitment to programming that would provoke debate and stir the public pulse was rejuvenated.

The Supreme Court weighed in on public television’s right to freedom of expression in its 1984 decision in Federal Communications Commission v. League of Women Voters of California. The league joined with Pacifica Corporation, which owned several public television stations, and Rep. Henry Waxman, D-Calif., in challenging section 399 of the Public Broadcasting Act of 1967. The section prohibited “editorializing” by any noncommercial broadcaster receiving money from CPB. The high court ruled in favor of the plaintiffs. Writing for the majority, Justice William J. Brennan Jr. stated that section 399 was unconstitutional because it “directly prohibits the broadcaster from speaking out on public issues even in a balanced and fair manner.”

Another major battle over programming content emerged after CPB chair Kenneth W. Tomlinson hired former Republican National Committee co-chair Patricia Harrison as president and chief executive officer of CPB; Harrison was asked to assess the degree of what Tomlinson considered “liberal bias” in noncommercial television. He took particular aim at NOW, a one-hour news program hosted by Moyers. Tomlinson also oversaw the creation of The Journal Editorial Report, a program underwritten by the Wall Street Journal, to provide what he considered to be conservative balance.

However, an investigation by CPB inspector general Kenneth Konz found that Tomlinson “violated statutory provisions” and the CPB board code of ethics by negotiating directly with programmers in creating Journal. Konz reported that e-mails between Tomlinson and White House staffers made it appear that Tomlinson “was strongly motivated by political considerations in filling the President/CEO position.”

PBS and FCC involved in indecency controversy over profanity

In 2006 Public Broadcasting System (PBS) President Paula Kerger took the federal government to task for what she called its “paralyzing” effect on public television stations. At a meeting of the Television Critics Association, Kerger accused the FCC of using unclear rules for enforcing decency standards to impose fines that could put stations out of business. As an example, she cited a $15,000 fine against KCSM-TV of San Mateo, California, for a 2004 airing of an episode of The Blues, a music documentary by director Martin Scorsese. The program contained interviews in which profanity was uttered that the FCC deemed unnecessary.

To stave off anticipated FCC fines in 2007, PBS distributed two different versions of Ken Burns’s World War II documentary The War; one version had been sanitized of several expletives, a move which a New York Times editorial described as “a troubling white washing of the nature of war.”

In March 2008, the Supreme Court agreed to examine the FCC’s “fleeting expletives” rules in Federal Communications Commission v. Fox Television Stations, after the Second Circuit Court of Appeals struck the rules down in June 2007. Under the fleeting expletive policy as interpreted lately by the FCC, a single curse word can cross the line into proscribable indecency. Critics contend this conflicts with the FCC’s earlier, more lenient policy. The circuit court found that the FCC’s rationale of defending community standards was “divorced from reality” and that the rules probably violated the First Amendment.