By Cleveland Ferguson III
Other articles in Media 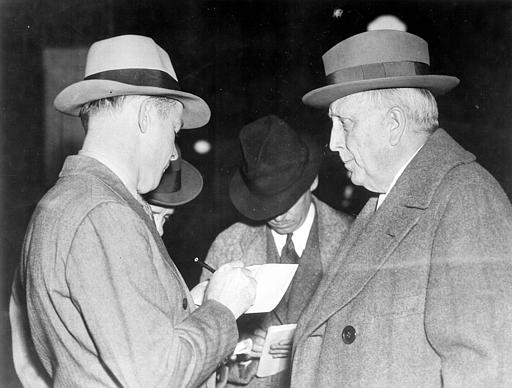 Publisher William Randolph Hearst, right, is interviewed by reporters, Nov. 7, 1935, on his return to "my home state of New York" due to Californian income taxes.  Hearst, publisher of the New York Journal, and rival Joseph Pulitzer, publisher of the New York World, are credited with the creation of yellow journalism in the late 1800s. (AP Photo, used with permission from the Associated Press)

Established late 19th-century journalists coined the term to belittle the unconventional techniques of their rivals. Although Eric Burns (2006) demonstrated that the press in early America could be quite raucous, yellow journalism is generally perceived to be a late 1800s phenomenon full of lore and spin, fact and fiction, tall tales, and large personalities.

Such journalism had the following characteristics:

The conservative press thought these characteristics amounted to misconduct in the gathering of news and launched a boycott of both newspapers.

The boycott was successful in excluding the two newspapers from the stands in the New York Public Library, social clubs, and reading rooms, but it only served to increase readership among average citizens who rarely frequented such establishments.

Overall, the boycott backfired. Circulation for both newspapers increased, and Hearst purchased other newspapers and insisted on the use of the same techniques in other cities.

The conservative press was itself not above printing the occasional fantastical story. Moreover, within ten years, almost every newspaper in the country began using large headlines for election day editions or illustrations and pictures to contextualize a crisis or celebration.

Hearst’s and Pulitzer’s newspapers eventually declined in circulation, but not before others had copied their methods.

The term 'yellow journalism' sourced to comic strip and editorials

Lore has suggested that the use of a comic strip illustrated by the World’s Richard Felton Outcault entitled “The Yellow Kid” (later poached by the Journal) and used to poke fun at industry, political, and society figures, was the source of the phrase “yellow journalism.”

Other sources point to a series of critical editorials by Ervin Wardman of the New York Press as coining the phrase after first attempting to stigmatize the practices as “new” and then “nude” journalism — “yellow” had the more sinister, negative connotation Wardman sought. Other editors began to use the term in their newspapers in New York, and it eventually spread to Chicago, San Francisco, and other cities by early 1897.

Although modern journalistic standards are arguably as high as they have ever been, some Supreme Court decisions have allowed for criticism, especially of public figures.

In Near v. Minnesota (1931), the Supreme Court set a strong presumption against prior restraint of publication, and New York Times Co. v. Sullivan (1964) further set a high bar for public figures who thought that articles printed about them were libelous.

McIntyre v. Ohio Elections Commission (1995) also ruled that individuals can publish anonymous criticisms of political issues, and newspapers’ use of anonymous sources is largely governed by a code of journalistic ethics.