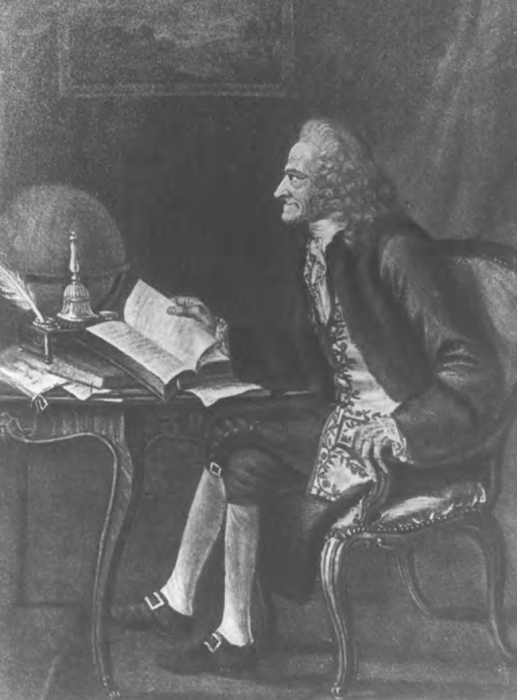 18th century French satirist and philosopher Voltaire was an important influence on those who sought justice, free inquiry, and separation of church and state. He rejected everything irrational and incomprehensible and championed freedom of thought. His rallying cry was “écrasez l’infâme” (“let us crush the evil thing”), referring to religious superstition. (Image via Library of Congress, public domain)

Voltaire was the pen name of Francois-Marie Arouet (1694–1778), a French author and philosopher of the Enlightenment period, who served as an inspiration to those on both sides of the Atlantic who were interested in free inquiry and secularism.

Voltaire’s prolific biting satire and philosophical writings demonstrated his aversion to Christianity, intolerance, and tyranny. He pleaded for a socially involved type of literature. Meanwhile, he rejected everything irrational and incomprehensible and championed freedom of thought. His rallying cry was “écrasez l’infâme” (“let us crush the evil thing”), referring to religious superstition. Also commonly attributed to Voltaire is the saying “I may disagree with you, but I defend to the death your right to say it.” (Author Evelyn Beatrice Hall attributed the saying to Voltaire in her work The Friends of Voltaire [1906]).

After defying his father’s wishes that he become a lawyer, Voltaire pursued his first love, writing, which quickly sparked difficulties with the authorities because of his sometimes harsh attacks on the government and the Catholic Church. The result was a series of imprisonments and exiles. In 1713 Voltaire was briefly exiled to the Netherlands. In 1717 he was imprisoned in the Bastille for satirical verses that ridiculed the government, and especially the regent, Philippe II, Duke of Orleans.

Voltaire’s writings won him fame, but in 1726 he feuded with a powerful young nobleman, the Chevalier de Rohan, and again was thrown into the Bastille. His unjust confinement only strengthened his passion for justice. He upheld the rights of men of letters against the arbitrary power of the king and of the nobles.

When given a choice between continued imprisonment and exile, Voltaire chose exile. He lived in England from 1726 to 1729. His 1728 “Poem of the League,” later retitled “The Henriad,” was an eloquent defense of religious toleration. In 1733 he published in England Letters Concerning the English Nation. The work appeared in France in 1734 in an unauthorized edition, Philosophical Letters. The letters praised English institutions, thereby constituting an indirect criticism of their French counterparts. French authorities condemned the book, and Voltaire fled from Paris to the independent duchy of Lorraine.

In 1750 Voltaire journeyed to Berlin at the invitation of Frederick II of Prussia, with whom he had corresponded for years. Voltaire condoned enlightened despotism in the belief that a strong but just prince would prevent factions from destroying each other. However, Voltaire’s wit clashed with the king’s autocratic temper and led to frequent disputes. Voltaire left after two years for Geneva.

After five years in Switzerland, Voltaire’s strong opinions forced another move. Later, he chose to live at Ferney, on the Swiss border, which then was not under the jurisdiction of the French king. There he spent the remaining twenty years of his life, able to enjoy security while allowing his writings to become even more outspoken.

Voltaire’s histories were not impartial; they were propagandistic and debunking, depicting the progressive victory of enlightenment and fraternity over ignorance, fanaticism, and evil. He contributed to the French Encyclopedie and wrote treatises, pamphlets, and tracts condemning abuse, injustice, greed, and arbitrary power. He advocated the principle that the punishment should fit the crime and criticized capital punishment and recourse to torture. Voltaire favored judges of integrity, chosen on the basis of merit and not by reason of their social origins.

Voltaire died in Paris at the age of 83. Stung by his ongoing criticism, the Roman Catholic Church refused to allow his burial in church ground. However, in 1791 his remains were transferred to the Pantheon in Paris.