By Mark Kessler
Other articles in Heads of Organizations or Founders 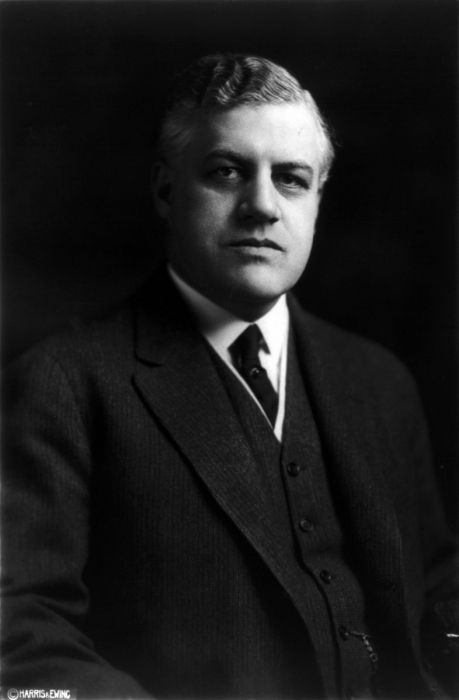 Alexander Mitchell Palmer, attorney general of the United States after World War I, was known for the controversial "Palmer raids" that were criticized by civil liberties group. Relying on the new Espionage Act and Sedition Act, his agents raided headquarters of communist, socialist, and anarchist organizations as well as labor union offices. (Photo via Library of Congress, public domain)

Alexander Mitchell Palmer (1872–1936), a lawyer, politician, and attorney general of the United States after World War I, is remembered for directing the notorious “Palmer raids,” a series of mass roundups and arrests by federal agents of radicals and political dissenters suspected of subversion.

Palmer became attorney general in 1919, as the first Red Scare was spreading throughout the country and First Amendment rights were under duress.

He was elected to Congress in 1908 and served three terms in the House of Representatives. He supported women's suffrage, the abolition of child labor, and tariff reform. In 1912, he played an important role at the Democratic National Convention, helping to nominate Woodrow Wilson for president.

President Wilson offered Palmer a cabinet post — secretary of war — but he declined because of his pacifist Quaker beliefs. The following year, Wilson appointed him as judge of the U.S. Court of Claims, where he served briefly before resigning to return to political work.

In 1917, Wilson appointed Palmer as an alien property custodian, where he conducted searches and seized properties belonging primarily to German aliens. His methods of investigation were criticized, as were his partisan appointments and broad construction of his powers. Wilson then appointed Palmer attorney general, where he served until 1921. He unsuccessfully sought his party’s nomination for president in 1920.

The repression of radicals and dissenters had begun during World War I, before Palmer became attorney general. The Department of Justice and its Bureau of Investigation, an agency that later developed into the Federal Bureau of Investigation, began to conduct surveillance on immigrant anarchist groups suspected of bombings that had occurred throughout the country.

The surveillance increased after 1917, when concerns about the Russian Revolution’s potential to spread communism combined with a new series of domestic bombings and heightened labor unrest to produce a growing public hysteria about radicals.

Palmer himself was the target of two anarchist bomb attacks. Partly in response to these attacks and partly as a way of furthering his presidential ambitions, he became a zealous opponent of radicals and their organizations.

He wrote articles and gave speeches warning of dangers posed by leftists. Armed with supplementary congressional appropriations earmarked for matters of internal security and relying on recently passed laws, such as the Espionage Act of 1917 and the Sedition Act of 1918, Palmer’s agents raided headquarters of communist, socialist, and anarchist organizations as well as labor union offices. In one raid, in December 1919, federal agents detained nearly 250 suspected subversives, including the anarchist Emma Goldman, and placed them on board a ship bound for the Soviet Union.

In January 1920, another 6,000 suspected radicals, most members of the Industrial Workers of the World (IWW), were arrested and those who were not citizens were deported. By the end of the month, 10,000 individuals had been rounded up in what became known as the Palmer Raids. At the time it was the largest mass arrest in the history of the United States. Although the public generally supported these efforts, Palmer and his federal agents were accused by civil liberties groups of using illegal and unconstitutional methods for obtaining evidence and conducting surveillance, including warrantless searches, illegal wiretaps, and cruel interrogation techniques.

Palmer mass arrests were criticized, led to founding of ACLU

In May 1920, an influential pamphlet, Report upon the Illegal Practices of the United States Department of Justice, was written and circulated by 12 prominent lawyers, including Felix Frankfurter and Zechariah Chafee Jr., charging Palmer with conducting illegal searches, the mistreatment of prisoners, and the use of agents provocateurs to entrap innocent individuals.

Other public figures and some public officials were inspired by this pamphlet to speak out as well. The American Civil Liberties Union was founded in 1920 largely in reaction to the violation of liberties that the Palmer raids represented. The organization later represented numerous individuals who were caught in a second Red Scare at the end of World War II, when the Soviet Union was emerging as a global power.

After serving as attorney general, Palmer stayed in Washington to practice law and remained active in Democratic Party politics until his death. The Palmer raids illustrate that important legal rights are sometimes violated during times of war and perceived crisis.

This article was originally published in 2009. Mark Kessler is a political scientist who has taught constitutional interpretation, constitutional freedoms, and legal politics at Bates College and Texas Woman’s University. He is the author of Legal Services for the Poor: A Comparative and Contemporary Analysis of Interorganizational Politics, co-author of the The Play of Power (with James Eisenstein, Bruce Williams, and Jacqueline Switzer), and author of numerous articles in scholarly journals.