By John R. Vile
Other articles in Heads of Organizations or Founders 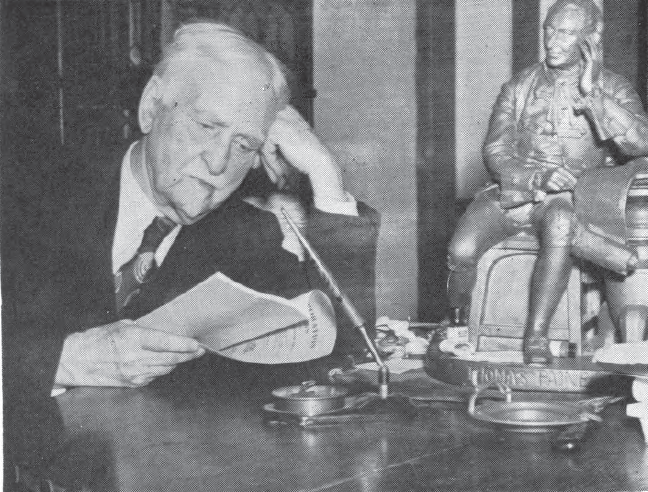 Theodore Schroeder, a lawyer and prolific writer, was one of the founders of the Free Speech League, a predecssor to the ACLU. (Photo by by Lesley Kuhn, public domain via Wikimedia Commons)

Theodore Schroeder (1864–1953), a lawyer and prolific writer on free expression rights granted by the First Amendment, was one of the founders and long-time secretary of the Free Speech League, the major organization committed to freedom of speech prior to the founding of the American Civil Liberties Union (ACLU). Schroeder, whose many publications included "Obscene” Literature and Constitutional Law (1911), emphasized the importance of defending all types of speech and press. In some of his writings, he went so far as to argue that the First Amendment protected the advocacy of treason and assassination, absent actual unlawful injury.

Schroeder grew up in Wisconsin, where he became a freethinker at an early age. He earned degrees in civil engineering and law from the University of Wisconsin. Perhaps in part because his mother had been ostracized when she married outside her faith, Schroeder became concerned about the persecution of members of the Church of Jesus Christ of Latter-day Saints, or Mormons, and began a law practice in Salt Lake City to help them.

He soon became disillusioned with Mormons’ anti-liberal tendencies, however, and crusaded against them. He founded Lucifer’s Lantern, a journal in which he outlined his view that Mormonism derived from sexual sources.  Schroeder moved to New York City, where he joined with others to exclude Brigham Roberts, a Mormon leader and polygamist, from Congress.

By 1904 Schroeder had joined the Free Speech League, where he was allied with journalist Lincoln Steffens, attorney Gilbert E. Roe, and others concerned with free expression rights.

Schroeder preferred writing to arguing cases before courts, but he extended resources of the Free Speech League to defend advocates of nude bathing, birth control, and alleged obscenity in addition to those with more traditional political viewpoints. The anarchist Emma Goldman and birth control advocate Margaret Sanger were among the league’s better known clients. The ACLU, founded in 1920, drew heavily on the prior research of Schroeder and the Free Speech League, although it initially focused on political speech. After a long career defending sometimes controversial causes, Schroeder spent the last 30 years of his life living quietly in Connecticut.