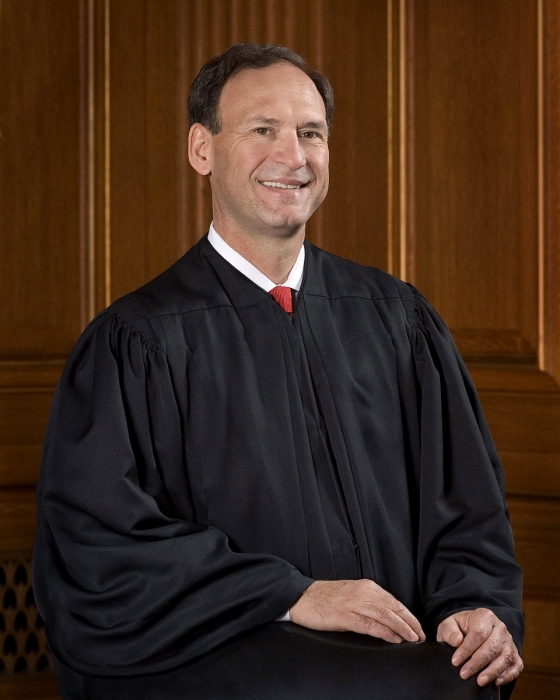 Supreme Court Justice Samuel Alito Jr. replaced the retiring Sandra Day O’Connor in 2006. In his years on the Court, Alito has shown some sensitivity to religious liberty but his record on free speech cases has been troubling. (Photo by Steve Petteway, Collection of the Supreme Court of the United States, public domain via Wikimedia Commons)

Samuel A. Alito Jr. (1950– ) assumed the position of a justice on the U.S. Supreme Court in January 2006. He replaced the retiring Sandra Day O’Connor. In his years on the Court, Alito has shown some sensitivity to religious liberty but his record on free speech cases has been troubling.

Born in 1950 in Trenton, New Jersey, Alito received an undergraduate degree from Princeton in 1972 and a law degree from Yale Law School in 1975. Upon graduation from Yale, he served as a law clerk for Leonard I. Garth of the Third U.S. Circuit Court of Appeals. After his clerkship, Alito became an assistant U.S. attorney for the District of New Jersey for four years, until moving to the U.S. Department of Justice in 1981 as an assistant to the solicitor general. In 1985 he received a promotion to deputy assistant attorney general. He became U.S. attorney for New Jersey in 1987.

While on the Third Circuit, Alito had established himself as a strong defender of commercial, student, and religious expression. He wrote the court’s opinion in Saxe v. State College Area School District (3d Cir. 2001) striking down a public school’s anti-harassment policy. Alito asserted that there is “no question that the free speech clause protects a wide variety of speech that listeners may consider deeply offensive, including statements that impugn another’s race or national origin or that denigrate religious beliefs.”

In Fraternal Order of Police v. City of Newark (3d Cir. 1999), Alito ruled that a city police department violated the free exercise of religion rights of two Muslim officers fired for refusing to shave their beards.

“Because the Department makes exemptions from its policy for secular reasons and has not offered any substantial justification for refusing to provide similar treatment for officers who are required to wear beards for religious reasons, we conclude that the Department’s policy violates the First Amendment,” he wrote.

On the Supreme Court, Alito again showed sensitivity to religious liberty concerns in a case filed under the Religious Liberty and Institutionalized Persons Act (RLUIPA), Holt v. Hobbs (2015).  Arkansas prison officials sought to justify a policy prohibiting even short beards, because inmates might hide contraband in them.  In his opinion for the Court, Alito wrote that the prison officials’ argument was “hard to take seriously.”

Alito authored one of the Court’s leading decisions on government speech in Pleasant Grove v. Summum (2009). The case involved the religion of Summum’s attempt to force a Utah city to place its religious monument in a public park.  The religion argued that the city engaged in viewpoint discrimination by denying its monument but placing a Ten Commandments monument in the park years earlier.  Instead, Alito reasoned that monuments in a public park were a form of government speech.

In a later government speech case, Walker v. Sons of Confederate Veterans (2015), Alito dissented from the Court’s finding that specialty license plates were a form of government speech. In his dissent, Alito wrote that a reasonable observer of the specialty plates would view the plates more as an expression of the car owner or driver more so than the government.

Alito filed the Court’s lone dissent in Snyder v. Phelps (2011), a case involving a protest of a military funeral by members of the Westboro Baptist Church.  The Court ruled in favor of the protesters, reasoning that they complied with lawful police orders to engage in their very offensive speech.  Alito viewed the issue much differently, writing passionately: “Our profound national commitment to free and open debate is not a license for the vicious verbal assault that occurred in this case.”

Alito also filed a solitary dissent in United States v. Stevens (2010), a case in which the Court invalidated a federal law criminalizing the distribution of images of animal cruelty. The Court ruled the law was overbroad, but Alito questioned whether the law really banned a substantial amount of protected speech.