By Sandeep C. Ramesh
Other articles in Scholars 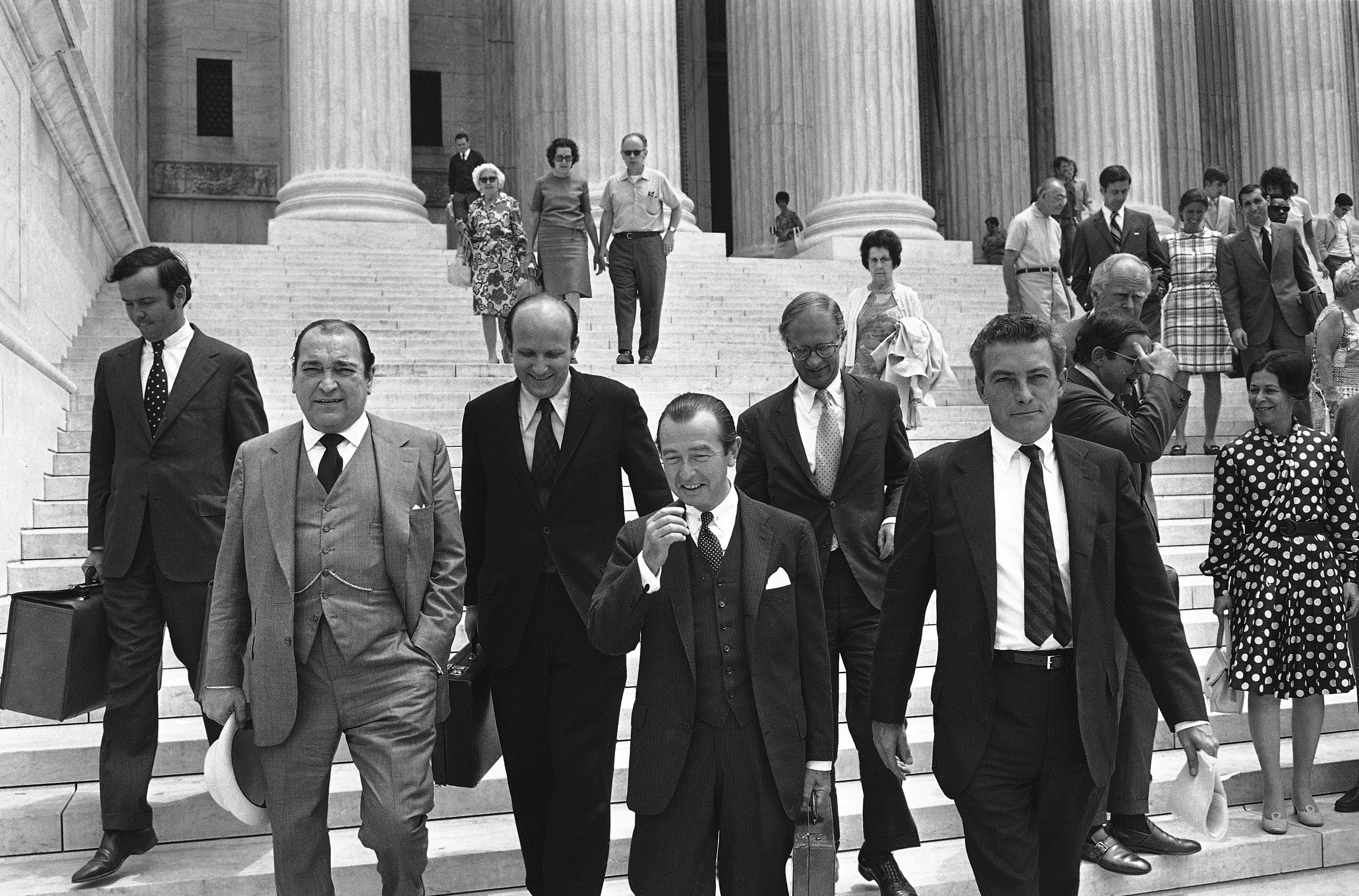 Alexander Bickel (1924-1974) was a recognized legal scholar of the Supreme Cout and the First Amendment. He represented the New York Times in the Pentagon Papers case, an important precedent for First Amendment press freedom. Here he is shown (third from left) leaving the Supreme Court on June 26, 1971, after presenting arguments in the case. From left Lawrence McKay, Floyd Abrams, Bickel, Times' Vice President James Goodale, and William Heggerty. (AP Photo/Charles Harrity used with permission from The Associated Press.)

Alexander Mordecai Bickel (1924–1974), one of the most well-known legal scholars of the twentieth century, contributed importantly to legal theory and scholarship, including that of the First Amendment.

Born in Romania, Bickel arrived in the United States when he was 14; later he became a citizen. Bickel graduated from City College of New York and from Harvard Law School before clerking during the 1952–1953 term for Justice Felix Frankfurter. He later worked as a research associate at Harvard before joining the faculty at Yale Law School.

Bickel wrote book about paradoxical role of the Supreme Court

Bickel wrote several books, but his most widely recognized work, The Least Dangerous Branch: The Supreme Court at the Bar of Politics, contains the seeds of an ever-growing debate about the political, moral, and adjudicative roles of the Supreme Court. Bickel insightfully noted the seemingly paradoxical situation in which an unelected body of nine justices strikes down congressional legislation as unconstitutional, even though the legislators represent the collective will of the people.

Deeming this paradox of the democratically unaccountable few (the Supreme Court justices) overriding the democratically elected many (Congress, proxy to the American people) as a “countermajoritarian difficulty,” Bickel ignited one of the greatest debates of constitutional law: the legitimacy of judicial review.

To alleviate the countermajoritarian difficulty, Bickel advocated a system of “private ordering,” whereby conflicts are resolved outside the Supreme Court and courts generally. Bickel also thought the Supreme Court could temper the countermajoritarian difficulty by exercising “passive virtues,” which Bickel understood to be the Court’s strategy of deciding cases on the narrowest ground — often procedural—available.

Thus, although Bickel favored many decisions of the Warren Court, he often found himself at odds with what he considered to be its “activism.”

In 1971 Bickel put aside his work as a legal theorist to represent the New York Times in New York Times Co. v. United States (1971) — the Pentagon Papers case — before the Supreme Court.

The case involved the disclosure by the New York Times and the Washington Post of classified Nixon administration documents related to U.S. involvement in the Vietnam War. Bickel argued that newspapers should receive First Amendment protection in publishing the Pentagon Papers against the Nixon administration’s insistence that the material remain undisclosed to the public.

Avoiding an absolutist approach to the First Amendment, Bickel advanced the argument that the government must meet a presumptively high burden to justify the prior restraint of information.

The case was ultimately decided on this fundamental issue, with the Court holding that the government had not overcome the rigorous burden of restraining information.

Accordingly, Bickel proved instrumental in defending newspapers’ First Amendment rights to publish the information in question, even — and perhaps especially — when the federal government insisted on keeping certain knowledge secret.

This article was originally published in 2009. Sandeep C. Ramesh was a law student at Yale University.