By Martin Gruberg (Updated May 2017 by John R. Vile)
Other articles in Scholars 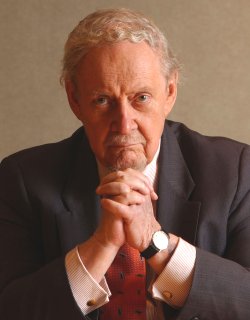 Robert Bork (1927–2012) was a former federal judge, a rejected Supreme Court nominee, and a staunch Republican and conservative legal scholar who advocated an originalist reading of the First Amendment. (Photo of Bork circa 2005 via U.S. Department of Justice, public domain)

Robert Bork (1927–2012) was a former federal judge, a rejected Supreme Court nominee, and a staunch Republican and conservative legal scholar who advocated an originalist reading of the First Amendment.

Bork received his law degree from the University of Chicago and practiced law in Chicago until 1962, when he joined the faculty of Yale Law School. He served as solicitor general under President Richard Nixon in 1973 and in October of that year famously dismissed Watergate special prosecutor Archibald Cox—who was engaged in an effort to force the White House to turn over tapes of conversations in the Oval Office—after Attorney General Elliot Richardson and his deputy resigned rather than fire Cox.

Bork argued First Amendment cases on behalf of the government

The cases variously concerned freedom of speech limitations in prisons and military installations, as well as restrictions regarding the transportation of pornography. Bork returned to Yale in 1977 and worked in a Washington, D.C., law firm from 1981 to 1982.

President Ronald Reagan appointed him to the U.S. Court of Appeals for the District of Columbia Circuit, from where he advocated judicial restraint. As a professor and as a judge, he consistently attacked the record of the Supreme Court as departing from the language and original intent of the framers. He was especially critical of the Court’s development of a right to privacy.

In 1987, Reagan nominated Bork to the Supreme Court, but the Senate rejected the nomination by a vote of 58–42 after a heated debate about his conservative ideology and judicial philosophy. Conservatives called the hearing an “ideological inquisition.” The contentious debate resulted in the coining of a new expression, ”borked,” in reference to the rejection of a judicial nominee through a concerted attack on his character, background, and philosophy.

After losing his confirmation, Bork resigned from the D.C. Circuit Court and taught at a number of law schools.

Bork continued to adhere to an originalist constitutional philosophy, which advocated following a literal interpretation of the framers’ language and intent. He believed that unelected, unrepresentative judges should defer to elected officials when making rulings. Bork also favored amending the Constitution to allow congressional supermajorities to overrule Supreme Court decisions.

In terms of the First Amendment, Bork argued in favor of a narrow reading of free expression that would extend protection only to pure political speech for individuals. Because he did not think the same protection extended to nonpolitical speech, he was more willing to accept censorship of what he considered to be pornography in television, film, and music.

In his best-selling Slouching towards Gomorrah (1996), Bork indicted modern liberalism, arguing that the sexual revolution and the rise of feminism led to a dangerous social and moral decline in the United States.

Bork died in Arlington, Virginia from heart disease in 2012.

This article was first published in 2009 and has been updated. The primary contributor was Martin Gruberg, former President of the Fox Valley Civil Liberties Union in Wisconsin. It has been updated by the First Amendment Encyclopedia.