By Alec Thomson
Other articles in Scholars 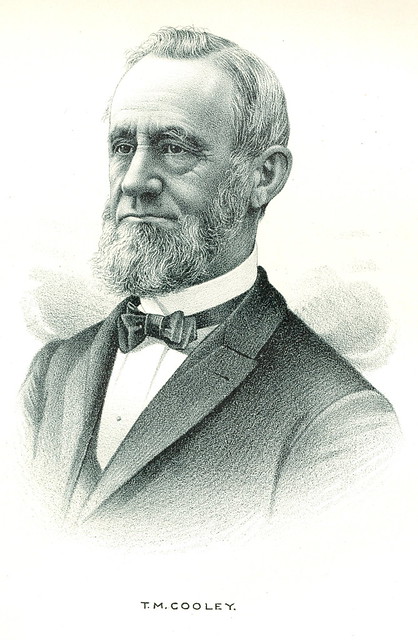 Thomas McIntyre Cooley (1824–1898) was a prominent jurist and legal writer during the second half of the nineteenth century who strongly defended property rights and First Amendment freedoms. (Image via Political Graveyard on Flickr, CC BY 2.0)

Thomas McIntyre Cooley (1824–1898) was a prominent jurist and legal writer during the second half of the nineteenth century who strongly defended property rights and First Amendment freedoms.

Originally from New York, Cooley settled in Michigan, where he completed his legal studies. At the age of thirty-five, he became a law professor at the University of Michigan and would play an important role in the institution’s growth and development. As a member of Michigan’s Supreme Court from 1865 to 1885, Cooley and Justices Isaac Christiancy, James Campbell, and Benjamin Graves became known as the Big Four. Working within the framework of a new state constitution, passed in 1850, they tackled legal issues arising from Reconstruction and the economic transformation of the Gilded Age.

Cooley sought to distinguish between private and public interests

Cooley’s contributions to American jurisprudence in these areas are best represented in A Treatise on the Constitutional Limitations Which Rest upon the Legislative Power of the States of the American Union (1868). Highly influential and widely read, Cooley’s treatise established the ground-work for a broad interpretation of due process protections for private property interests and liberty of contract arguments.

Cooley’s writings, however, are not a blanket endorsement of a laissez-faire vision of U.S. government or regulation. Indeed, while on the Michigan Supreme Court, Cooley sought to draw clear lines between private and public interests. When the Michigan legislature empowered municipalities to levy taxes in support of local railroad construction, Cooley thought the law unconstitutional, stating that railroads “are not, when in private hands, the people’s highways; but they are private property.” Appointed by President Grover Cleveland to chair the Interstate Commerce Commission, Cooley persisted in his efforts to serve as a “friendly umpire” between the public and private interests at stake in the railroad industry.

Cooley had an expansive view of individual speech rights

Cooley’s efforts to limit the power of corporations and government led him to adopt an expansive view of individual rights. He favored wide protections for free speech and in Constitutional Limits wrote that even in cases where speech is seen as excessive, “the evil likely to spring from the violent discussion will probably be less, and its correction by public sentiment more speedy, than if the terrors of the law were brought to bear to prevent the discussion.”

While on the Michigan Supreme Court, he sought to limit the use of libel and defamation cases by public figures to curtail the efforts of journalists. Cooley believed that small errors and problems were an inevitable by-product of discussion, but to institute excessive punishments for such errors would unnecessarily limit free speech. Although his view was not endorsed by a majority of Michigan’s Supreme Court, the U.S. Supreme Court’s decision in New York Times Co. v. Sullivan (1964) embodies many of the principles that Cooley advanced.

This article was originally published in 2009. Alec Thomson is a professor of political science and history at Schoolcraft College in Livonia, Michigan. He is the editor of The Community College Enterprise, a peer-reviewed journal dedicated to publishing research on teaching and learning within the community college arena.