By Stephen Robertson
Other articles in Scholars 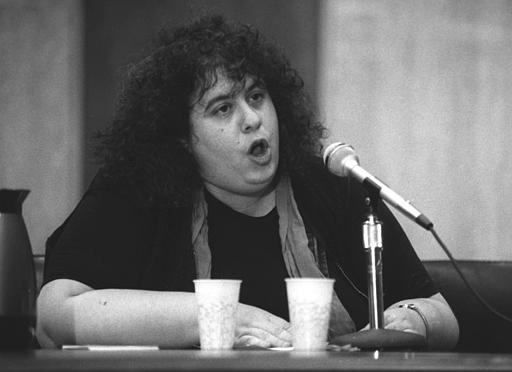 Civil rights advocate and author Andrea Dworkin speaks to a federal commission on pornography in New York in this 1986 photo. Dworkin was a feminist who viewed pornography as a violation of women's civil rights and a direct cause of rape and violence. She denied First Amendment protections for pornography. She died at age 58 in 2005. (AP Photo/Richard Drew, used with permission from the Associated Press)

In defense of women’s rights, Andrea Dworkin (1946–2005), a radical feminist writer and theorist, launched sweeping attacks on pornography that led to harsh criticism of her by civil libertarians as well as by anti-feminists.

Dworkin was one of the most radical American feminists

Born in Camden, New Jersey, Dworkin attended Bennington College in Vermont. During an anti–Vietnam War protest march in New York City, she was arrested and subjected to a violent and humiliating body cavity search by two male policemen.

In 1969 she moved to Europe, where she suffered through an abusive marriage. Perhaps influenced by these experiences, upon her return to the United States in 1972 she established herself as one of the foremost, and most controversial, radical feminist voices.

Dworkin is best known for her strident opposition to pornography, which she defined in Pornography: Men Possessing Women (1981) as “a celebration of rape and injury to women.”

She campaigned tirelessly against pornography, rejecting free-speech defenses and arguing that it perpetuated male domination, encouraged violence against women, and made women into second-class citizens, in violation of their equal rights.

Working with law professor Catharine MacKinnon, Dworkin drafted a law that defined pornography as sexually explicit materials depicting women as dehumanized objects to satisfy men’s desires and that allowed those harmed by pornography to file civil suits against its makers and distributors.

Indianapolis adopted the proposed ordinance, but the Seventh Circuit Court of Appeals, in American Booksellers Association v. Hudnut (7th Cir. 1985), ruled that it was an unconstitutional violation of the First Amendment.

Dworkin was also an important witness before the Attorney General’s Commission on Pornography (the Meese Commission) in 1986.

In her testimony, she attacked pornography and urged prosecutors to use anti-racketeering statutes against pornographers. She explained that she opposed obscenity laws on the grounds that they were ineffective and “woman-hating in their very construction. Their basic premise is that it’s women’s bodies that are dirty.”

The controversy over Dworkin’s work stems from her radical views and her provocative expression of them.

She wrote that a rape victim should be allowed to personally execute her attacker and famously that “[intercourse] is the means by which the male colonizes the female.” (She did not, however, claim that all heterosexual intercourse is rape, a statement that is often attributed to her.)

Amid equally passionate supporters and detractors, Dworkin crusaded for women’s rights throughout her life. In addition to her individual writings, she co-authored, with Catharine MacKinnon, Pornography and Civil Rights: A New Day for Women’s Equality (1987) and In Harm’s Way: The Pornography Civil Rights Hearings (1998).