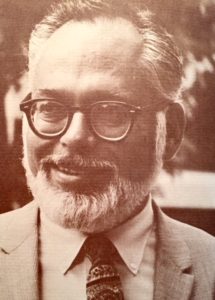 Leonard Levy wrote more than 40 books on the Constitution and Bill of Rights. The U.S. Supreme Court has cited his writings in several First Amendment cases. Levy died in 2006.

Leonard W. Levy (1923–2006) was an influential scholar and historian whose works on the Constitution and Bill of Rights have been widely read, cited, debated, and discussed.

He wrote nearly 40 books, including the controversial Legacy of Suppression: Freedom of Speech and Press in Early American History (1960), Origins of the Fifth Amendment: The Right against Self-Incrimination (1969), Emergence of a Free Press (1985), and The Establishment Clause: Religion and the First Amendment (1994).

Born in Toronto in 1923, Levy obtained his undergraduate degree from the University of Michigan and his Ph.D. from Columbia University. His academic career took him to Brandeis University, Claremont Graduate School, and Southern Oregon State College. He won a Pulitzer Prize for his Origins of the Fifth Amendment in 1969.

His Legacy of Suppression work caused controversy because Levy concluded that the nation’s founders (including Thomas Jefferson, whom he credited in other works with furthering the idea of separation of church and state) intended only limited protection for freedom of speech and press under the First Amendment. He later revised his views in Emergence of a Free Press.

The Court cited his Emergence of a Free Press in Ward v. Rock against Racism (1989), and McIntyre v. Ohio Elections Commission (1995).

Writing on Levy’s passing at the age of eighty-three in 2006, First Amendment scholar Ronald K. L. Collins called Levy “one of the great constitutional scholars of our time.”