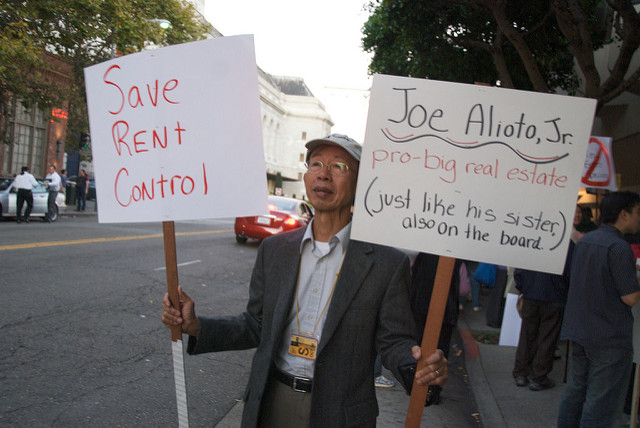 A Supreme Court case over contribution limits to groups formed to oppose or support ballot measures arose from a fight over rent control in Berkeley, Calif.  A 1977 ballot measure would have controlled rents on many housing units in Berkeley if passed.  Citizens Against Rent Control raised more than $250 from some of its contributors, in violation of the city's campaign finance regulation. The Supreme Court, however, found it was unconstitutional to limit how much individuals could contribute to such groups. Rent control continues to be a political issue in many cities, as this 2008 photo from a Save San Francisco rally attests. (Photo by Steve Rhodes, licensed under CC BY-NC-SA 2.0.)

In Citizens Against Rent Control v. Berkeley, 454 U.S. 290 (1981), the Supreme Court rejected a Berkeley, California, statute limiting individuals’ contributions to groups opposing or supporting ballot initiatives to no more than $250 on the grounds that it violated the right of expression and association.

Berkeley’s act also limited the amount that could be spent in elections to support or oppose ballot measures.

The Supreme Court resolved challenges to the FECA in Buckley v. Valeo (1976), which clarified that contributions could be limited in furtherance of a governmental interest in combating corruption or the appearance of corruption of candidates in the political process, but that expenditure limitations violated the First Amendment.

Buckley did not address the constitutionality of contributions or expenditure limits relating to ballot measures.

Section 602 of the Berkeley act limited groups formed to support or oppose a ballot measure to collecting contributions from individuals in amounts less than or equal to $250.

In seeking to oppose a local rent control measure, Citizens Against Rent Control (CARC), an unincorporated political association, solicited and accepted nine contributions in amounts exceeding $250 and was therefore fined by Berkeley’s Fair Campaign Practices Commission. The case made its way through the California court system and was then appealed to the Supreme Court.

The justices asserted that the practice of collective action is fundamental and embedded in American political life.

It took particular issue with the differential treatment of wealthy individuals and groups of citizens observing, “Under the Berkeley ordinance an affluent person can, acting alone, spend without limit to advocate individual views on a ballot measure. It is only when contributions are made in concert with one or more others in the exercise of the right of association that they are restricted by § 602.”

Focusing on restraint on political association, the justices applied strict scrutiny in assessing the case.

The Berkeley ordinance failed to stand up to strict scrutiny because the city’s interest in ensuring that the public knows who is supporting or opposing ballot measures is satisfied by disclosure requirements; there was no evidence to support (as articulated by the California Supreme Court) a state interest in maintaining voter confidence in the ballot measure process.

The Court noted that absent concerns about corruption or appearance of corruption of a candidate, a statute or ordinance restricting First Amendment expressive or associational rights could not satisfy the strict scrutiny required by Buckley and its progeny.

Citizens Against Rent Control is often cited for the proposition that in contrast to candidates, a ballot measure cannot be corrupted, and no other compelling interest exists for restricting the exercise of speech and associational rights in the context of ballot measure election activity.

This article was originally published in 2009. Mary-Beth Moylan is an associate dean and professor at the University of the Pacific's McGeorge School of Law. Since 2003, she has supervised the publication of the California Initiative Review, an online journal providing objective and neutral analysis of each statewide ballot proposition.