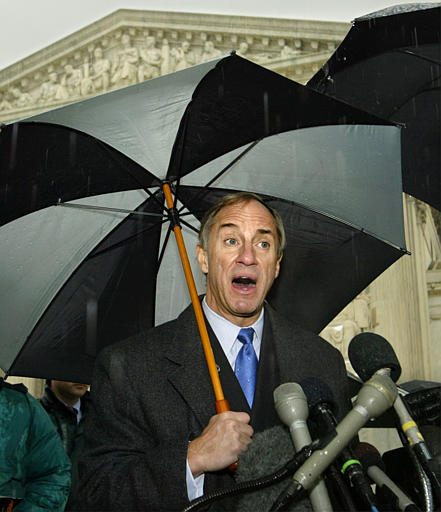 Prominent First Amendment lawyer Rodney Smolla talks with reporters outside the U.S. Supreme Court in 2002 after arguing before justices that Virginia's cross-burning law violated the First Amendment rights to free speech. Smolla is a prolific author and has written several books related to First Amendment law, including the influential treatise, The Law of Defamation. (AP Photo/J. Scott Applewhite, used with permission from the Associated Press)

Rodney A. Smolla (1953– ), dean of Widener University Delaware Law School, is an expert on the First Amendment, both as an academic and as a practitioner.

He has argued before the Supreme Court and has written numerous books on freedom of expression, including Free Speech in an Open Society (1992) and Falwell v. Larry Flynt: The First Amendment on Trial (1988).

Born in Bloomingale, Illinois, Smolla earned an undergraduate degree from Yale University and a law degree from Duke University, where he finished first in his class. After graduation, he clerked for Judge Charles Clark on the U.S. Court of Appeals for the Fifth Circuit before entering private practice with the Chicago office of Mayer, Brown and Platt.

In 2010, he became the President of Furman University.  He resigned that position in 2013 and in 2015 took his current position as Dean at Delaware Law School.

Although celebrated as a free expression giant, Smolla engendered controversy by advocating on behalf of the family members of three murder victims in a wrongful death suit against Paladin Press, the publisher of Hit Man: A Technical Manual for Independent Contractors.

In this case an assassin had followed the step-by-step instructions detailed in the “manual.” Smolla prevailed in Rice v. Paladin Enterprises, Inc. (4th Cir. 1997), as the U.S. Court of Appeals for the Fourth Circuit held that the publisher could be civilly liable for publishing and marketing the book without violating the First Amendment. Smolla discusses the case in his book Deliberate Intent (1999).

Smolla argued before the Supreme Court, in Virginia v. Black (2003), that a Virginia state law against cross burning violated the First Amendment.

The Court upheld the law as a way to prohibit true threats but invalidated a part of the law that allowed a jury to infer that all those who burned crosses did so with the intent of conveying a true threat.

Smolla also has written an influential treatise on defamation entitled The Law of Defamation (2000), a work that has been cited in two Supreme Court decisions — Milkovich v. Lorain Journal Co. (1990) and Masson v. New Yorker Magazine (1991).

He also has taken over new editions of Meville Nimmer’s famous free speech treatise, Nimmer on Freedom of Speech.

Smolla also has published legal scholarship on commercial speech, academic freedom, prior restraint, hate speech, and a variety of other First Amendment issues.