By John H. Matheson (Updated May 2017 by John R. Vile)
Other articles in Religious Perspectives and Churches 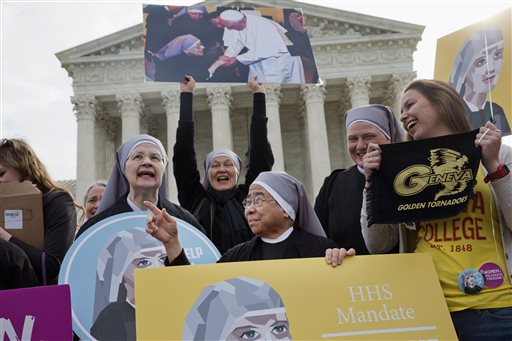 Roman Catholics have been involved in First Amendment religious liberty issues as well as controversies surrounding the separation of church and state. In this photo, nuns with the Little Sisters of The Poor rally outside the Supreme Court in 2016 as the court hears arguments about requiring birth control coverage in healthcare plans in the Zubik vs. Burwell case. The Catholic nuns argued this was a burden on their religious liberty. (AP Photo/Jacquelyn Martin, used with permission from the Associated Press)

The Roman Catholic Church is a Christian denomination that accepts the supremacy of the pope as the successor to Jesus Christ. The Church itself considers the qualifier “Roman,” which derives from the geographical seat of the papacy, to be erroneous because it believes that it is the true “catholic,” or universal, Christian church.

Issues relating to the free exercise of religious liberties or the establishment of religion by the government are not unique to any particular religious affiliation. Indeed, it is the neutrality and inclusiveness of the First Amendment’s religion clauses — resulting in part from the framers’ knowledge of conflicts between Catholics and Protestants in Europe — that make the religious clauses a powerful force in support of the free exercise of religious liberties and the separation of church and state.

The United States was largely founded by Protestants, with Catholics playing a smaller role.

Some early colonies discriminated against Catholics. The hegemony of Protestant thought and practice in public schools through much of the nineteenth century led many Catholics to form their own schools, which led to tensions concerning what, if any, type of government aid was appropriate.

State Blaine amendments, which restricted all aid to parochial schools, were one mechanism of limiting such assistance.

Although the Supreme Court used strong separationist language in its decision in Everson v. Board of Education (1947), it nonetheless permitted states to reimburse parents for bus service for their children to parochial school.

City of Boerne v. Flores (1997), which arose from a denial of a permit request by a Texas-based Catholic church to enlarge its building, struck down a provision of the Religious Freedom Restoration Act of 1993 in a battle over the meaning of the free exercise clause and fundamental concerns over separation of powers.

In Zelman v. Simmons-Harris (2002), the Court upheld a school voucher program in Cleveland, Ohio, against an establishment clause challenge based on the overwhelming use of the vouchers to send kids to private Catholic schools.

For a time, many Protestants were wary of Catholic politicians, fearing that they would divide their loyalty between the nation and the papacy. It was not until 1960 that a Catholic, John F. Kennedy, was elected president. The current Supreme Court is composed of a majority of Catholics.

Although Roman Catholic laypersons, especially in the United States, do not always reflect the opinions of their leaders, the Church continues to take strong conservative stances in opposition to contraception, abortion, and same-sex marriage.

Catholics often find themselves allied with Evangelical Christians on such issues.Thus the Little Sisters of the Poor joined Evangelicals who challenged Affordable Care Act provisions requiring employers to provide contraception for their employees as contrary to their free exercise rights. Some Catholic adoption services have closed rather than arrange adoption for same-sex couples. Some bishops have also threatened to withhold the Eucharist or to excommunicate Catholic elected officials who publicly support abortion rights.

Catholic social thought also supports the rights of immigrants to hospitality, a position that has been in tension with President Trump’s announced policies. The Roman Catholic Church in America may have additional reasons to be wary of the effects of anti-immigrant policies since many immigrants from Latin America are Roman Catholics. Catholic social thought emphasizing provisions for the poor and dispossessed may provide the basis for further opposition to governmental budget cuts to social programs designed to aid these groups.