By Dennis Miles (Updated May 2017 by John R. Vile, updated Oct. 2019 by encyclopedia staff)
Other articles in Religious Perspectives and Churches 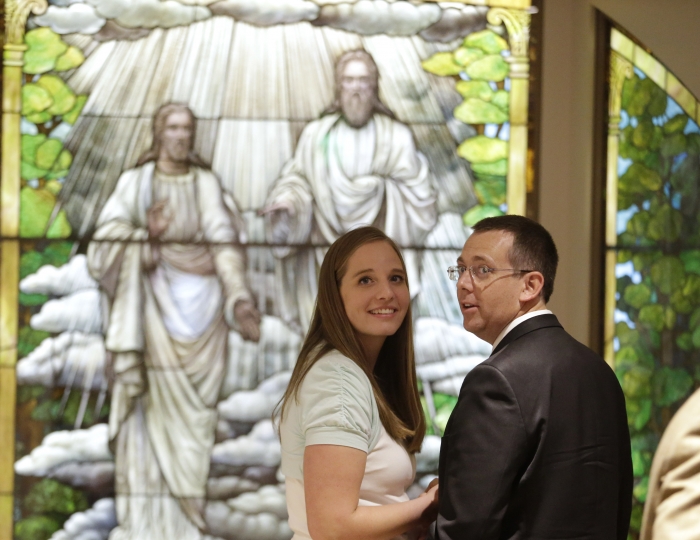 Laurel and Hyrum Ence tour the Mormon Church History Museum, Tuesday, Sept. 29, 2015, in Salt Lake City. The Church of Jesus Christ of Latter-day Saints renovated history museum features a small and surprising display about an uncomfortable part of the faith’s history that for generations has been glossed over: polygamy. Some of the Supreme Court's first cases on the free exercise of religion clause involved the church challenging laws against polygamy.  (AP Photo/Rick Bowmer. Photo used with permission from The Associated Press)

The Church of Jesus Christ of Latter-day Saints, LDS Church or LDS, has always been committed to the principle of religious freedom.

This commitment is found in one of their books of scripture called Doctrine and Covenants: “We believe that religion is instituted of God; and that men are amenable to him, and him only, for the exercise of it, unless their religious opinions prompt them to infringe on the rights of others...that the civil magistrate should restrain crime, but never control conscience; should punish guilt, but never suppress the freedom of the soul” (section 134, verse 4).

The eleventh Article of Faith states, “We claim the privilege of worshiping Almighty God according to the dictates of our own conscience, and allow all men the same privilege, let them worship how, where, or what they may.”

The LDS Church recognizes the necessity of government for holding people accountable for their actions and promoting the good and safety of society. The twelfth Article of Faith affirms the duty of citizens to obey the rule of law. Indeed, Mormons believe that God had a hand in the development of the U.S. Constitution.

Although the Mormons believe in religious freedom and the divine origin of the Constitution, they fared poorly early on in their relations with the government and fellow citizens.

The Church was persecuted for their religious beliefs

LDS beliefs were often at odds with the established religions of the day. First in New York, then Ohio, and finally Missouri, citizens and local governments violently persecuted Mormons, primarily for their religious beliefs, but also because of perceptions that the church was directed in a dictatorial fashion and that some of its tenets (especially polygamy) were illegal.

In 1838, the governor of Missouri issued an order for them to be driven from the state or exterminated. They then settled in Nauvoo, Illinois, but within a few years once again faced violent persecution, which led to the death of Joseph Smith at the hands of a mob who stormed a prison where he was being held.

By 1847 the Mormons had left for Utah, where they were isolated from the rest of the country and able to develop their own form of government for several years.

In 1852, the Mormons made public their practice of polygamy, or plural marriage.

Joseph Smith had claimed that God commanded him to initiate the practice, which at its height involved no more than 25 percent of adult Mormons. By the 1860s, public disapproval of it had grown quite strong.

In 1862, Congress passed the Morrill Anti-Bigamy Act, which authorized the federal government to “punish and prevent the practice of polygamy in the Territories.” The Mormons felt that the law abridged their constitutional right to religious freedom.

Congressional pressure continued in ensuing years in the form of additional anti-polygamy laws. In 1882, the Edmunds Act imposed fines and prison sentences for practicing polygamists. In 1887, the Edmunds-Tucker Act voided the church’s incorporation, and the federal government seized its assets.

These statutes provided the Supreme Court with its first opportunity to interpret the First Amendment’s free exercise clause. In Reynolds v. United States (1879), the Court distinguished between religious beliefs and religious conduct. Although the free exercise clause protects religious belief, it extends less protection to religious conduct. Davis v. Beason (1890) and Late Corporation of the Church of Jesus Christ of Latter-day Saints v. United States (1890) further limited the practice of polygamy and confirmed the disincorporation of the Church.

After LDS president Wilford Woodruff announced that he had received a revelation in 1890 and that the church would thereafter obey the law, the crisis over polygamy and legal confrontation with the government subsided. By the early twentieth century, polygamy had further passed into history when a “second manifesto” excommunicated anyone practicing polygamy.

Church has been involved in other First Amendment cases

When Utah gained statehood in 1896, its constitution provided for freedom of religion and protection against church domination of state and local government. Since then, relations between the government and the LDS Church have been more peaceful, with only occasional legal challenges over personal injury, property issues, and business concerns. One such recent challenge, Utah Gospel Mission v. Salt Lake City Corporation (10th Cir. 2005), concerned the church’s effort to buy a section of main street next to the Temple square in Salt Lake City and convert it into a plaza with easements for public access. The church was given the right to restrict behavior and speech in the plaza, which raised free speech concerns and charges of improper establishment of religion. Many government officials were members of the church. The case was resolved when the city and the church agreed that the city would relinquish the public easement in the plaza and in return the church would give the city other land that it wanted, as well as some financial consideration.

Another establishment clause case, Corporation of the Presiding Bishop of the Church of Jesus Christ of Latter-Day Saints v. Amos (1987), involved church termination of several employees in alleged violation of the Civil Rights Act of 1964. The Supreme Court ruled that a religious exemption, section 702, in the act did not violate the establishment clause and that the religious anti-discrimination exemption was constitutional.

Other cases involving the church have centered on the free exercise and establishment clauses and land zoning restrictions. In Boyajian v. Gatzunis (1st Cir. 2000), a group of citizens in Belmont, Massachusetts, objected to the LDS Church building a temple in their residential neighborhood. The citizens argued that a state law, the Dover amendment, was unconstitutional in disallowing zoning ordinances that prohibit, regulate, or restrict the use of land for religious purposes. The court ruled that the amendment did not violate the establishment clause and therefore the temple could be built. Other cases involving the LDS Church, freedom of religion, and land use include a 1990 case from Alabama, Church of Jesus Christ v. Jefferson County, and one from 2005 from Oregon, Corporation of Presiding Bishop v. City of West Linn.

Romney was concerned his Mormon faith would hurt his politics

In the political arena, while seeking the Republican nomination for the presidency, former Massachusetts governor Mitt Romney became concerned that his Mormon identity might be hurting him in the polls. In an attempt to assuage the public’s misgivings, in December 2007 he gave a speech that some commentators compared to one John F. Kennedy delivered in 1960 to address concerns about his Roman Catholicism. While acknowledging his faith, Romney argued that if elected, his oath to the U.S. Constitution, rather than his faith, would outline his paramount duty.

Although Romney did not win the Republican nomination in 2008, he did run in 2012, and very little of the campaign centered around his religion or that of his running-mate, Wisconsin representative Paul Ryan, who was a Roman Catholic. A Pew study shows that the percentage of white evangelicals who voted for Romney was almost identical to the percentage of Mormons who did so” (“The Media, Religion…, 2012).

This article was originally published in 2009 and updated in 2017 and 2019. Dennis Miles is a reference and instruction librarian at Texas Wesleyan University.