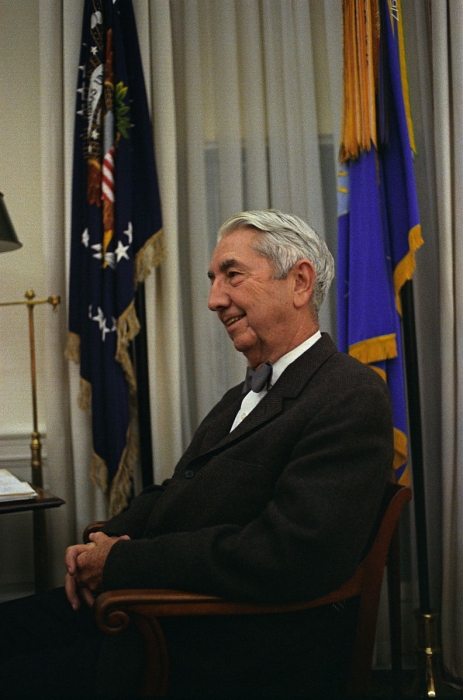 Appointed to the bench by President Harry S. Truman, Tom C. Clark served as an associate justice of the Supreme Court from 1949 to 1967. He resigned after Lyndon B. Johnson appointed his son, Ramsey Clark, as U.S. attorney general.

Born in Texas, Tom Clark finished an undergraduate degree and attended law school at the University of Texas at Austin, earning an A.B. in 1921 and an LL.B. in 1922. He joined his father’s firm and subsequently served as a Dallas district attorney before joining the administration of Franklin D. Roosevelt in 1937, serving as a special assistant in the Justice Department and as head of the antitrust and criminal divisions. In 1945 Truman appointed Clark attorney general. In that position, Clark developed a reputation for supporting Truman’s programs requiring public employees to declare their loyalty to the government.

Clark showed independence from Truman on the bench

The Senate confirmed Clark for the bench by a 73-8 vote to replace Francis P. Murphy, who had died. Initially fairly supportive of Truman, Clark showed increasing independence, such as voting against Truman’s seizure of the steel mills in Youngstown Sheet and Tube Co. v. Sawyer (1952).

His most important written decision may well be Mapp v. Ohio (1961), in which he applied the exclusionary rule to the states to enforce the search and seizure provision of the Fourth Amendment.

Clark is probably best known in First Amendment jurisprudence for his measured opinion in the companion cases Abington School District v. Schempp and Murray v. Curlett (1963). In these suits, the Court extended the majority decision (which Clark had joined) in Engel v. Vitale (1962) to ban public prayer in public schools. In the 1963 cases, the justices extended the ban to include devotional Bible readings and the Lord’s Prayer. Clark explained that his opinion did not forbid states from teaching religion in a nondevotional context.

He also authored the decision in United States v. Seeger (1965), expanding conscientious objector status to those for whom opposition to war held an equivalent place to religious belief. Clark wrote the decision in Burstyn v. Wilson (1952), striking down a New York law against sacrilege as applied to the film entitled The Miracle.

Clark opposed a loyalty oath while on the bench

Despite his support of loyalty oaths while attorney general, Clark authored the decision in Wieman v. Updegraff (1952) striking down an Oklahoma loyalty oath on the basis that it applied to individuals who joined the Communist Party regardless of whether they had knowledge of its mission.

After retiring from the Court, Clark helped found and direct the Federal Judicial Center.