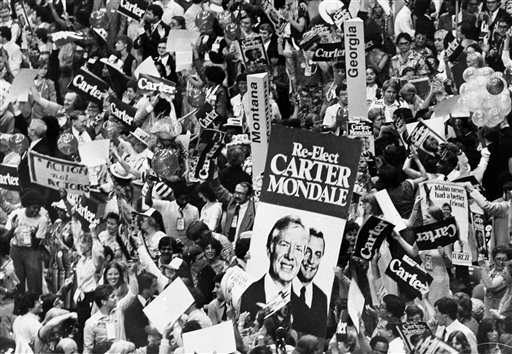 State laws dictating how delegates vote at national party conventions violate the First Amendment rights of political parties, the Supreme Court said in Democratic Party of United States v. Wisconsin ex rel. LaFollette (1981). Wisconsin held open primaries and mandated that delegates to the National Democratic Convention vote based on the primary results. However, the Democractic Party of the United States refused to seat Wisconsin delegates unless they voted for candidates chosen only by registered Democratic voters. The Court said Wisconsin could not compel the Democratic Party to admit its delegates without violating the First Amendment rights of the political party. The 1980 Democratic National Convention, pictured here, went on to nominate President Jimmy Carter for re-election. (AP Photo, used with permission from the Associated Press)

Democratic Party Selection Rule 2A for the 1980 national convention restricted participation in the delegate selection process to Democratic voters “who publicly declare their party preference and have that preference publicly recorded.” This rule conflicted with a Wisconsin electoral statute allowing members of competing political parties, as well as independents, to vote in the state’s “open” Democratic primary without having declared their Democratic Party preference.

In addition, Wisconsin law required that delegates selected under this system vote in accordance with the results of the primary election.

The national Democratic Party indicated its intent to refuse to seat delegates selected through Wisconsin’s primary process. In response, the Wisconsin attorney general brought a declaratory action seeking a court determination affirming the constitutionality of the statute.

Justice Potter Stewart, writing for the Court, framed the issue as a question of “whether, once Wisconsin has opened its Democratic Presidential preference primary to voters who do not publicly declare their party affiliation, it may then bind the National Party?”

The justices determined that organizations such as the Democratic Party enjoy constitutionally protected First Amendment associational rights that are implicated when a state defines the set of individuals eligible to pass judgment on an important party matter, such as delegate selection.

The Wisconsin Supreme Court had argued that the burden imposed on the national party was a minor one. Stewart judged this largely immaterial because courts should not interfere with a decision or expression of a party even if it finds that expression “unwise or irrational.”

The Court also carefully considered whether the state proffered a sufficiently compelling rationale to justify the regulation. The state asserted interests in preserving the overall integrity of the electoral process, furthering the secrecy of the ballot, increasing primary participation, and preventing voter harassment.

Although the Court recognized the importance of these goals, the majority concluded that each of the interests “go to the conduct of the Presidential preference primary — not to the imposition of voting requirements upon those who, in a separate process, are eventually selected as delegates.”

Therefore, the Court rejected the requirement that Wisconsin’s party delegates vote in accordance with the results of Wisconsin’s open primary.