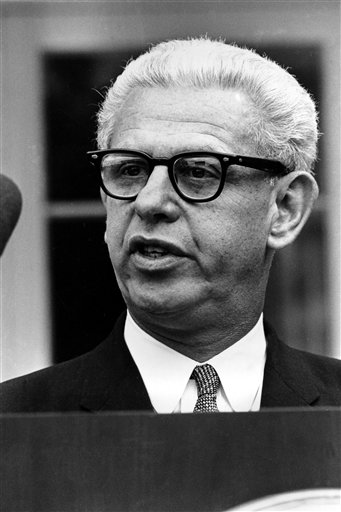 Arthur Goldberg, shown in 1965 in this photo, is best known for his labor law work, but he contributed important views of First Amendment law in Cox v. Louisiana (1965) and New York Times Co. v. Sullivan (1964). Goldberg served on the Supreme Court from 1962 to 1965. He then went back to private practice and even argued cases in the Supreme Court. (AP Photo, File, used with permission from the Associated Press.)

Arthur Goldberg (1908–1990) served on the Supreme Court from 1962 to 1965, providing a consistent vote for the protection of individual rights, including First Amendment freedoms.

Justice William H. Rehnquist wrote upon Goldberg’s death in 1990 that he “contributed far more to the jurisprudence of the Supreme Court than one would think possible in so brief a period of service” (Rehnquist 1990: 809).

Goldberg is best known for work in labor law

Goldberg is best known for his work in the public and private sectors in the labor law arena.

Born in Chicago, Goldberg earned his law degree from Northwestern University Law School, finishing first in his class. He then practiced labor law in Chicago.

Professor David Sebenne said of him, “From the late 40’s through 1960 Goldberg played an important part in all of the major developments that took place in the American labor movement” (Berendt et al. 1999: 684).

President John F. Kennedy appointed Goldberg secretary of labor in 1961 and a year later nominated him to the Court to replace the retiring Felix Frankfurter.

Goldberg left the Court in 1965 after President Lyndon B. Johnson urged him to replace Adlai Stevenson as U.S. ambassador to the United Nations. After resigning in 1968 as ambassador, Goldberg returned to private practice, first in Chicago and then in Washington, D.C.

His practice included Supreme Court advocacy, as he argued before the high court in the famous baseball free-agency case Flood v. Kuhn (1972), in which the Court ruled that baseball was exempt from federal antitrust laws.

He authored the Court’s majority opinions in Cox v. Louisiana (1965), in which the Court (in two separate opinions) reversed the convictions of civil rights leader Ben Elton Cox for disturbing the peace, obstructing public passages, and picketing before a courthouse.

Goldberg wrote that upholding these convictions “would allow persons to be punished merely for peacefully expressing unpopular views.”

Goldberg also wrote a concurring opinion in New York Times Co. v. Sullivan (1964), the landmark libel decision in which he argued for even greater protection for the press from libel suits than that set out in Justice William J. Brennan Jr.’s majority opinion.

Goldberg, joined by Justice William O. Douglas, advocated absolute protection for criticism of public officials rather than the actual malice standard used by Brennan. He wrote, “In my view, the First and Fourteenth Amendments to the Constitution afford to the citizen and to the press an absolute, unconditional privilege to criticize official conduct despite the harm which may flow from excesses and abuses.”