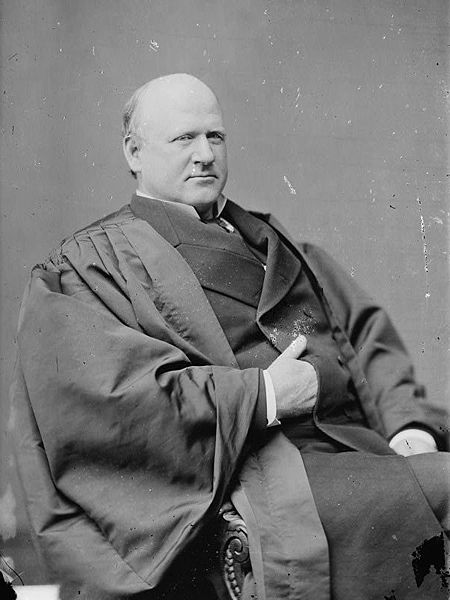 Justice John Marshall Harlan I between 1870 and 1880. Harlan transformed himself over time from being a slave holder and advocate of the institution to becoming a strong proponent of the Union and defender of First Amendment rights. He was an early campaigner for the incorporation of the guarantees in the Bill of Rights (including those in the First Amendment) into the due process clause of the Fourteenth Amendment, where they would limit the states as well as the federal government.
(Image via the Brady-Handy Photograph Collection (Library of Congress), public domain)

John Marshall Harlan (1833–1911), a lawyer and Supreme Court justice, transformed himself over time from being a slave holder and advocate of the institution to becoming a strong proponent of the Union and defender of First Amendment rights.

Serving on the Court for 34 years, Harlan became a committed champion of civil rights for minorities (mostly in dissent). He was an early campaigner for the incorporation of the guarantees in the Bill of Rights (including those in the First Amendment) into the due process clause of the Fourteenth Amendment, where they would limit the states as well as the federal government. Harlan’s position on this matter became known as the doctrine of incorporation, a doctrine that became important in twentieth-century First Amendment and civil rights litigation.

Harlan was born in Mercer County, Kentucky, and was named for the great Chief Justice John Marshall. His father, James, was a lawyer, Whig, and congressman. Harlan earned a bachelor’s degree from Centre College in Danville and spent two years at Transylvania University in Lexington before he finished his studies by reading law at his father’s law office. After passing the bar and beginning practice in 1853, he entered Whig Party politics.

As the Whig Party disintegrated, Harlan underwent a series of political and philosophical changes. He briefly became a “Know Nothing,” in 1857, and was then a Constitutional Unionist in support of John Bell in the 1860 election. During the Civil War (1861–1865), Harlan was a staunch Unionist. He joined the Union army and advanced to the rank of colonel before resigning his commission after his father’s death. Shortly after that, he was elected attorney general of Kentucky.

He denounced President Abraham Lincoln’s Emancipation Proclamation, issued in 1863, as unconstitutional. He did not manumit his own slaves until the Thirteenth Amendment abolishing slavery forced his hand. He continued to defend slavery by strongly opposing the Fourteenth and Fifteenth Amendments, which extended the rights and privileges of full citizenship and the right to vote to freed slaves. He had voted for George McClellan, a Democrat, in the 1864 election and became a Republican in 1868.

In 1871 Harlan accomplished a spectacular reversal in his beliefs when he abruptly began supporting the Reconstruction amendments. He publicly renounced his former views on slavery and Reconstruction in his unsuccessful campaign for the governorship of Kentucky, running as a Republican. He was mentioned as a running mate with Ulysses S. Grant in the 1872 presidential election, and he helped elect Rutherford B. Hayes in 1876. Hayes, in turn, fulfilled Harlan’s lifelong dream by appointing him to the Supreme Court in 1877.

Harlan is known as the Great Dissenter

Justice Harlan wrote 123 of his 891 written opinions in dissent, and some of those dissenting opinions have become the stuff of legend in American constitutional history, earning him the label “the Great Dissenter.” His was the lone dissent in United States v. Harris (1883), in which the Court ruled that the federal government could not prosecute Sheriff R. G. Harris and others for conspiring to lynch four black prisoners in Tennessee. The Court majority argued that the Fourteenth Amendment applied only to state action, not to the acts of individuals acting apart from the state.

Later that year, Harlan wrote a notable dissent in the Civil Rights Cases (1883) — five separate cases brought by African Americans that were based on criminal actions defined in the Civil Rights Act of 1875. This congressional law outlawed acts of discrimination based on skin color or previous condition of servitude in public accommodations and transportation. The Court, in an 8-1 decision, with Justice Joseph Bradley announcing the majority opinion, adopted a narrow view of national power under the Reconstruction amendments and declared a portion of the law unconstitutional.

The Fourteenth Amendment prohibits state acts of discrimination, said the Court, but the law erred when it outlawed private acts committed by private individuals and privately owned businesses that are not agents of the state. The Court further stated that outlawing private acts places the alleged victims in a special class singled out for special protections.

Harlan, in his dissent, clung to Radical Republican tenets and argued that the victims were not asking for special privileges but were seeking equal treatment with the majority race. Allowing acts of discrimination by private individuals creates a badge of slavery that marks an identifiable minority as inferior and violates the Reconstruction amendments.

Harlan's most famous dissent was in Plessy v. Ferguson

In Plessy v. Ferguson (1896), the Court, in a 7-1 decision read by Justice Henry Billings Brown, continued its narrow interpretation of the Fourteenth Amendment by upholding a state law providing for racial segregation. Brown said the state could separate the races if the facilities were equal.

In his most famous and eloquent dissent, Harlan held that “our Constitution is color-blind,” that “in this country there is no superior, dominant ruling class of citizens,” and that it is wrong to allow the states to “regulate the enjoyment of citizens’ civil rights solely on the basis of race.” Harlan predicted that the decision would plant the “seeds of race hate” into state law.

Despite his protest, the Plessy decision further entrenched racial segregation into state law and established the separate but equal doctrine until the Court overturned it in Brown v. Board of Education (1954). Harlan was also the lone dissenter in Berea College v. Kentucky (1908), in which the Court ruled that a segregation law could be enforced by the state against a long-integrated college in Kentucky.

Harlan joined the Court majority in Reynolds v. United States (1879) and in Davis v. Beason (1890), in supporting laws against polygamy in the U.S. territories. The Court did not believe that polygamists George Reynolds or Samuel Davis could use their free exercise rights under the First Amendment to evade laws relative to marriage.