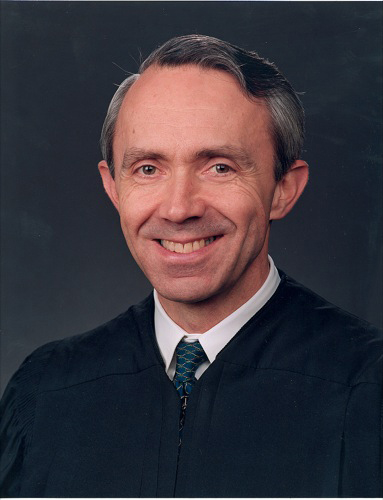 Supreme Court Justice David Souter circa 1990. Although sensitive to many First Amendment issues during his time on the Court, including sexual expression and the separation of church and state, Souter also supported restrictions on campaign finance and some restrictions on free expression. (Public domain)

Justice David Hackett Souter (1939- ), a jurist who served on the Supreme Court from 1990 until 2009,  often showed sensitivity to First Amendment values. In most areas of First Amendment jurisprudence, he was a consistent voice for the protection of free-expression principles.

Born in Melrose, Massachusetts, David Souter earned an undergraduate degree from Harvard University in 1961. He then won a Rhodes scholarship, graduating in 1963 from Oxford University with a bachelor’s and master’s degree. After receiving a law degree from Harvard in 1966, Souter spent two years as a lawyer in private practice in Concord, New Hampshire, before beginning a long career in public service.

In 1990, President George H. W. Bush nominated Souter to the First U.S. Circuit Court of Appeals and, later that year, to the Supreme Court to replace Justice William J. Brennan. At the time of his nomination, Souter had not published many controversial opinions and was thus described as something of a “stealth” candidate. John Sununu, White House chief of staff, said that Souter’s confirmation would be a “home run” for conservatives — a prediction that proved erroneous. The Senate confirmed him by a vote of 90-9.

Souter began his career on the Court by joining majorities that restricted free expression.

He joined a five-member majority in Rust v. Sullivan (1991), which upheld an abortion speech gag rule based on the government speech doctrine.

He concurred in a nude dancing decision, Barnes v. Glen Theatre, Inc. (1991), reasoning that government officials could regulate the expressive content of nude dancing by relying on the secondary effects doctrine — a theory that arose from adult, land-use zoning cases.

Souter later perhaps thought he had gone too far in his concurring opinion in Barnes. When the majority of the Court used Souter’s concurrence in Barnes to restrict totally nude dancing in City of Erie v. Pap’s A.M. (2000), Souter candidly wrote about his previous position: “I may not be less ignorant of nude dancing than I was nine years ago, but after many subsequent occasions to think further about the needs of the First Amendment, I have come to believe that a government must toe the mark more carefully than I first insisted. I hope it is enlightenment on my part, and acceptable even if a little late.”

In his later years on the Court, Souter continued to question the government’s suppression of sexual expression.

For example, he dissented in United States v. Williams (2008), a case involving the criminalization of pandering speech about child pornography. Souter wrote: “But the Government does not get a free pass whenever it claims a worthy objective for curtailing speech, and I have further doubts about the need claimed here.”

Over time Souter evolved into a justice more protective of First Amendment values, which he often expressed in dissenting opinions.

He filed a solitary dissent in National Endowment for the Arts v. Finley (1998), arguing that the NEA’s decency requirements for art grants had the potential to chill artistic expression. He dissented in the Court’s public-employee speech case, Garcetti v. Ceballos (2006), believing that the majority failed to consider the impact of its ruling on academic freedom.

Souter also wrote for the majority in First Amendment decisions. For example, in Hurley v. Irish-American Gay, Lesbian and Bisexual Group of Boston (1995), he wrote for a unanimous Court that organizers of a parade had a First Amendment expressive association right to exclude groups divergent to its overall message.

Souter championed the wall of separation between church and state

Souter consistently championed the view that the establishment clause of the First Amendment was intended to erect a fairly high wall of separation between church and state.

He dissented in Rosenberger v. Rector and Visitors of the University of Virginia (1995), reasoning that the Court improperly elevated the free speech principle of no viewpoint discrimination over the establishment clause.

“The Court is ordering an instrumentality of the State to support religious evangelism with direct funding,” he wrote. “This is a flat violation of the Establishment Clause.”

He vigorously dissented in Zelman v. Simmons-Harris (2002), arguing that an Ohio school-voucher plan amounted to governmental support of Roman Catholicism. “How can a Court consistently leave Everson [(1947)] on the books and approve the Ohio vouchers?” Souter asked. “The answer is that it cannot.”

He wrote the Court’s main opinion in McCreary County v. American Civil Liberties Union (2005), ruling that displays of the Ten Commandments in two Kentucky county courthouses violated the establishment clause.In Pleasant Grove v. Summum (2009), Justice Souter questioned in his concurring opinion whether the government-speech doctrine would apply to free speech claims in the same way as an establishment clause claim.

Souter wrote many majority opinions on the First Amendment in the area of campaign finance regulations. Generally, he supported restrictions on campaign contributions in order to combat corruption or the appearance of corruption.

In Federal Election Commission v. Wisconsin Right to Life, Inc. (2007), the Court, under Chief Justice John G. Roberts Jr., had seemingly backtracked on a prior decision — McConnell v. Federal Election Commission (2003). Souter took the unusual step of reading his dissent from the bench, contending that the majority had in effect overruled its previous decision in McConnell.

“After today, the ban on contributions by corporations and unions and the limitation on their corrosive spending when they enter the political arena are open to easy circumvention, and the possibilities for regulating corporate and union campaign money are unclear,” he wrote.