By Robert A. Kahn
Other articles in Religious Perspectives and Churches 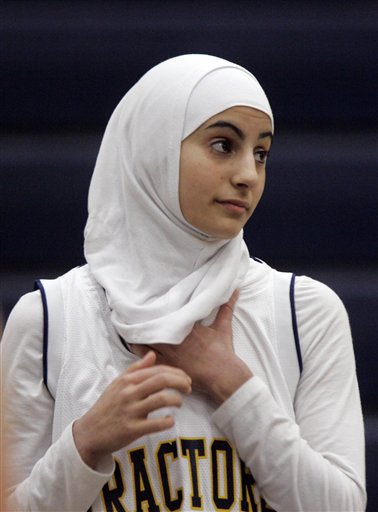 A high school basketball player wears a hijab during a game in Dearborn, Michigan in 2007. Hijabs are one unique First Amendment issue raised by the Islamic religion. In the United States, most school districts allow students to wear headscarves, but three states ban teachers from wearing religious clothing. Outside schools, proponents of the hijab have had mixed success. (AP Photo/Carlos Osorio, used with permission from the Associated Press.)

Some six million Muslims reside in the United States, two million of whom belong to a mosque. The U.S. Muslim population largely consists of immigrants or descendants of immigrants from South Asia or Arab countries; about a third are African American. Like those of other religious minorities, the religious beliefs and practices of Muslims have sometimes raised First Amendment free exercise issues.

The custom followed by some Muslim women to wear a headscarf (hijab) in public has provoked controversy in several European countries. In France, schoolchildren are not allowed to wear headscarves; in Germany, many states ban teachers from wearing them.

In the United States, most school districts allow students to wear headscarves, and some school districts that initially refused to allow headscarves changed their position after protests from parents and Muslim groups. Three states—Nebraska, Oregon, and Pennsylvania—ban school teachers from wearing religious clothing. In the face of religious discrimination lawsuits filed by teachers, the courts have upheld the constitutionality of these statutes. It is not yet clear how school uniform requirements might affect the religious rights of public school students.

Outside of schools, proponents of the hijab have had mixed success. After protests, Wisconsin reversed a policy banning hijabs in prison visitation rooms. However, in Freeman v. State (Fla. Cir. Ct. 2003) a court, interpreting Florida’s Religious Freedom Restoration Act, held that a woman could not pose for a driver’s license photo wearing a niqab, a religious veil that covers the entire face except for the eyes, although in the 1970s and 1980s some courts had allowed Pentecostal Christians to forgo license photos altogether. In distinguishing the earlier cases, the court repeatedly referred to the danger posed by terrorism.

The rights of Muslim prisoners, especially in the area of dietary privileges, have generally grown over the decades and are now protected by the Religious Land Use and Institutionalized Persons Act of 2000. However, in O’Lone v. Estate of Shabazz (1987) the Supreme Court held that prison authorities could ban weekly prayers held on Fridays because they could undermine prison safety. Meanwhile, the Federal Bureau of Prisons, concerned about the spread of radical Islam in prisons in the wake of the al-Qaida attacks of September 11, 2001, placed a moratorium on the hiring of Muslim chaplains that may be unconstitutional.

A similar issue is Muslim charities. Since the events of September 11, the U.S. Treasury Department has blocked the assets of twenty-seven Muslim charities on suspicion of passing funds to terrorists. In Holy Land Foundation for Relief and Development v. Ashcroft (D.D.C. 2002), a federal district court rejected the charity’s free exercise claim, because the charity in question did not represent itself as a religious entity and because there is no free exercise right to support terrorists.

Although Islam does not formally recognize a separation of church and state, Islam vis-à-vis the establishment clause has roused little debate. However, the practice of weekly prayers poses tough questions for public schools that seek to accommodate Muslim religious preferences without endorsing Islam. In Eklund v. Byron Union School District (9th Cir. 2006), the Ninth Circuit Court of Appeals held that forcing students to take an Islamic name and read a prayer in a social studies role-playing exercise did not violate the establishment clause.

The September 11 attacks refocused attention on the boundary between political advocacy and incitement of terrorist acts. Some cases involved facts that if true would meet the Brandenburg v. Ohio (1969) standard of incitement of imminent lawless action that government had the right to punish.

For example, in 2005 federal authorities successfully prosecuted Ali al-Timimi, a U.S. biologist and prominent Islamic leader, for encouraging U.S. Muslims to take up arms in support of the Taliban. Authorities also prosecuted Sami al-Arian, a Florida computer science professor, for raising funds for the Palestinian Islamic Jihad organization. After the jury acquitted him on some counts and deadlocked 10-2 in favor of acquittal on the others, al-Arian accepted a guilty plea.

Muslims have been victims of free speech

Muslims have also been the victims of free speech. In Citizen Publishing Co. v. Miller (Ariz. 2005), the Arizona Supreme Court held that a letter to the editor in a Tucson paper arguing that after another attack on U.S. soldiers in Iraq “we” should “go to the closest mosque” and kill five Muslims was not imminent incitement under Brandenburg because the threat would only go into effect after the next attack. Even though many Muslims kept their children out of school in response to the letter, the court also held that unlike the burning cross at issue in Virginia v. Black (2003), the letter was not directed at an individual or group of individuals.

Freedom of speech also figured in the controversy over the publication in the Jylands Post, a Danish newspaper, of cartoons depicting the Prophet Muhammad in a negative light. Muslims objected to the cartoons both because many Muslims believe that Islam forbids pictorial representations of the Prophet and because they found the cartoons to be insulting. Although many European papers republished the cartoons, often as a statement of explicit solidarity for the Post, few papers in the United States ran the cartoons, and most of those that ran them did so because they felt the controversy over the cartoons had made them newsworthy.