By Dale Mineshema-Lowe
Other articles in Judges and Justices, Presidents 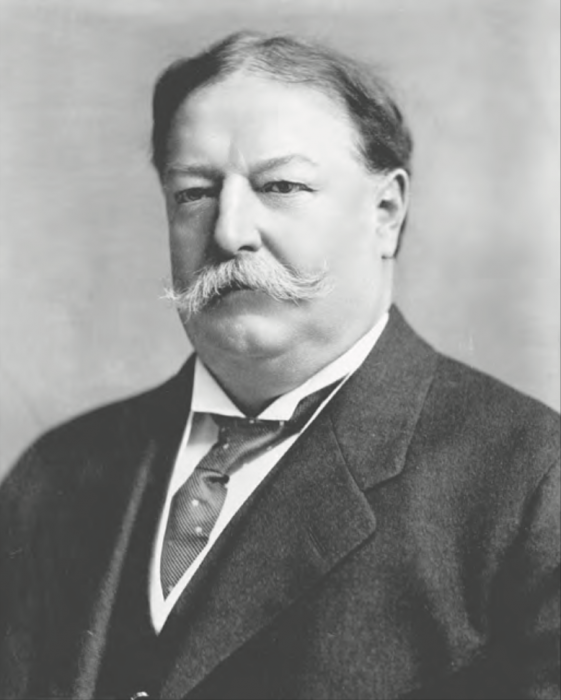 William Howard Taft was the 27th President of the United States and 10th Chief Justice of the United States, the only person to have served in both positions. Taft presided over the Supreme Court as it began to incorporate First Amendment provisions into the due process clause of the Fourteenth Amendment. (Image via Library of Congress Prints and Photographs online collection, public domain via Wikimedia Commons)

William Howard Taft (1857–1930), a lawyer, jurist, and politician, is the only person to have served as both President and then as chief justice of the United States. As chief justice, from 1921 until he retired in 1930, Taft presided over the Supreme Court as it began to incorporate First Amendment provisions into the due process clause of the Fourteenth Amendment.

Taft was born in Cincinnati, Ohio, the son of Alphonso Taft, a prominent Republican lawyer and judge who served as secretary of war under President Ulysses S. Grant. William Howard Taft followed in his father’s footsteps, attending Yale and later serving as secretary of war. He earned a law degree in 1880 from Cincinnati Law School.

His career began with his appointment as assistant prosecutor of Hamilton County in Ohio. Within two years, in 1882, he was appointed local collector of internal revenue. Five years later he was appointed judge in the Ohio Superior Court, where he sat until 1890, when President Benjamin Harrison appointed him solicitor general of the United States. In 1892 Harrison made him an associate judge for the newly created U.S. Court of Appeals for the Sixth Circuit. Taft became chief judge and held the post within the Sixth Circuit until 1900. During this time he earned a doctor of laws degree from Yale Law School. In 1904 President Theodore Roosevelt appointed him secretary of war, sending him to Japan and Cuba. Taft also helped oversee the beginning of construction on the Panama Canal.

Roosevelt began to plan for Taft to succeed him as the Republican presidential candidate in the 1908 election. Although Taft himself would have preferred an appointment as chief justice, he ran for and won the presidency. As President, Taft differed greatly in style from his predecessor and mentor; most significantly, he believed in working within the confines of law instead of stretching presidential powers as Roosevelt had done.

Taft helped establish a parcel post system, expanded the civil service, and strengthened the Interstate Commerce Commission. He signed a law that created the Department of Labor. He also supported passage of the Sixteenth Amendment, which permitted a national income tax, and the Seventeenth Amendment, which mandated the direct election of senators by the people. In foreign affairs, he pursued what he termed “dollar diplomacy” to further economic development of less-developed nations.

During his presidency, Taft alienated many liberal Republicans — including eventually Roosevelt himself. These Republicans formed the Progressive Party, which split Republican votes in the election of 1912 and resulted in the election of Democrat Woodrow Wilson. After his defeat, Taft went on to serve as Kent Professor of Constitutional Law at Yale Law School and as president of the American Bar Association.

Taft was nominated to the Supreme Court after his presidency

In 1921, upon the death of Supreme Court Chief Justice Edward Douglass White, President Warren G. Harding nominated Taft to be chief justice. He was unanimously confirmed by the Senate. As chief justice, Taft wrote more than 200 opinions for the Court, utilizing a strict constructivist approach to constitutional interpretation that was historically and contextually based. He used his political clout to urge Congress to pass the Judiciary Act of 1925, which increased the Court’s authority over its certiorari jurisdiction.

Taft Court examined whether the First Amendment applied to the states

Taft also successfully lobbied Congress for the current building that houses the Supreme Court, although he did not live to see it completed. He died a little over a month after his retirement from the Court in 1930.