By Marc-Georges Pufong
Other articles in Religious Perspectives and Churches 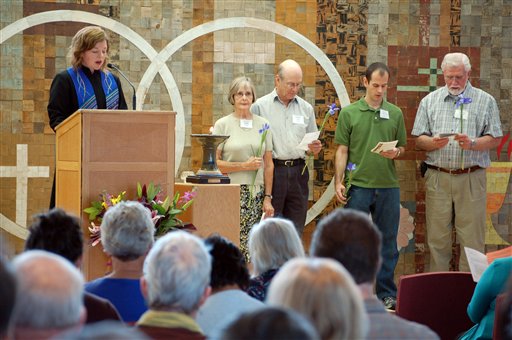 Unitarianism is a form of Christianity that denies the doctrine of the Trinity. In 1961, the consolidation of the Unitarian and Universalist denominations brought together two distinct traditions to form a creedless movement that acts today as an umbrella organization for religious liberals all over the world. The lack of a formal creed has been central to attacks by critics who argue Unitarianism is without religious content and thus not subject to protections of religious freedom afforded by the First Amendment. In this 2011 photo, Betty Higbie, 78, second from left, and, Lee Higbie, 70, center, are formally introduced as new members of the First Unitarian Church of Albuquerque in Albuquerque, New Mexico. (AP Photo/Russell Contreras, used with permission from the Associated Press.)

Unitarianism is a form of Christianity that denies the doctrine of the Trinity, whereby God is manifested as the Father, the Son, and the Holy Spirit.

Originally a scripturally oriented denomination, in the mid-nineteenth century it became a religion of reason and liberal theology under the leadership of James Martineau in England and Ralph Waldo Emerson and Theodore Parker in the United States.

Although early European leaders of anti-Trinitarian ministries such as Francis David and Michael Servetus were prosecuted for their beliefs, Unitarians in the United States have practiced their religion without interference. In fact, many early American deists, including Thomas Jefferson and John Adams, held Unitarian beliefs.

The consolidation of the Unitarian and Universalist denominations in 1961 brought together two distinct traditions to form a creedless movement that acts today as an umbrella organization for religious liberals all over the world. Under its current name, Unitarian Universalism is a theologically liberal and inclusive belief system representing one thousand congregations with some 217,000 members.

Unitarian Universalists claim a theological orientation that aspires to creativity, freedom, and compassion with respect for diversity and interconnectedness. Members seek spiritual growth and justice-making through fellowship, personal experience, social action, and education.

This lack of a formal creed has been central to recent attacks by critics who argue that Unitarianism is without religious content and therefore not subject to the protections of religious freedom afforded in the First Amendment.

For example, in 2004 the Red River Unitarian Universalist Church in Denison, Texas, was briefly denied its 501(c) (3) tax-exempt status by the Texas state comptroller Carole Keeton Strayhorn. A tax-exempt status offers a church, among other things, the assurance that all membership donations by tithes, offerings, and gifts will be fully tax-deductible.

Under the Texas law, a church is exempt once the comptroller determines that its members have “simply a belief in God, gods, or a higher power.” In its decision denying tax-exempt status to the Red River Unitarian Universalist Church, the Texas state Comptroller held that the church had to forfeit its status because it “does not have one system of belief.”

While the decision was reversed by the same office just two weeks later, the initial ruling denying exempt status raised First Amendment questions concerning the free exercise of religion and the separation of church and state. The state comptroller denied tax-exempt status to the Red River Unitarian Universalist Church — as it had done before to other groups, such as the Ethical Culture Fellowship of Austin — because in the view of the comptroller the Unitarian Universalists did not mandate a “belief in a supreme being.”

The issue as the state comptroller’s office saw it was one of fraud prevention. However, in its initial determination, the comptroller overlooked the obvious First Amendment free exercise question of the stated “standard” for determining the religiousness of a group.

This article was originally published in 2009. Dr. Marc G. Pufong is a specialist in Public Law and Professor of Politics, Public Law and Courts at Valdosta State University. Dr. Pufong's teaching interest and research focuses on constitutional law and judicial politics, international law and politics and human rights and conflicts. He is also co-author of three books including Georgia State Politics: The Constitutional Foundations, 7th edition (2016) with Lee M. Allen and Researching Constitutional Law, 4th edition (2013) with Albert P. Melone.