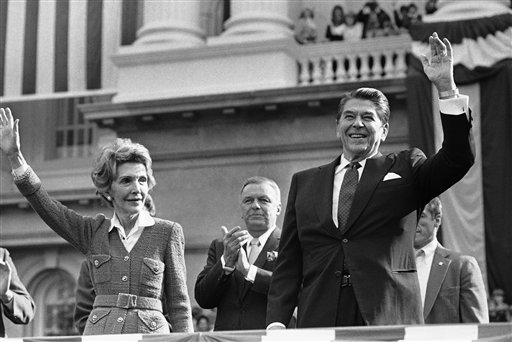 In FEC v. National Conservative PAC (1985), the Supreme Court ruled that a section of the Presidential Election Campaign Fund Act was unconstitutional. The section prohibited independent political action committees, like the National Conservative PAC, from spending over $1000 behalf of candidates who had accepted public financing for their campaigns. The National Conservative PAC had challenged the law because they wanted to help get President Ronald Reagan re-elected. In this photo, President and Mrs. Ronald Reagan wave to the crowd during a campaign rally outside the Capitol in Sacramento, California in 1984. (AP Photo/Scott Stewart, used with permission from the Associated Press)

By a vote of 7-2, the Supreme Court ruled in Federal Election Commission v. National Conservative PAC, 470 U.S. 480 (1985), that a section of the Presidential Election Campaign Fund Act was unconstitutional. The section prohibited independent political action committee expenditures in excess of $1,000 on behalf of candidates who had accepted public financing for their campaigns. The National Conservative PAC had challenged the law because they wanted to help get President Ronald Reagan re-elected.

In the majority opinion, Justice William H. Rehnquist asserted that the type of speech practiced by independent political action committees was protected by the First Amendment, reasoning that limiting expenditures was, in effect, limiting speech. “Allowing the presentation of views while forbidding the expenditure of more than $1,000 to present them is like allowing a speaker a public hall to express his views while denying him the use of an amplifying system,” he wrote.

Rehnquist used strict scrutiny to examine the speech regulation. He first asked whether the government had a compelling interest that justified circumvention of the speech.

The government justified the regulation in order to prevent corruption, both realized and perceived. But Justice Rehnquist argued that the record demonstrated this risk was merely hypothetical.

Moreover, even if the potential was real, the regulation was overbroad because it affected both “multimillion dollar warchests” and informal discussion groups.

Justice White’s comprehensive dissent took issue with Buckley v. Valeo (1976), the foundational precedent for the case. He also argued that as a precedent Buckley was ultimately irrelevant because, in that case, Congress had acted in the narrowest manner possible to protect the public financing of elections.

Justice Marshall’s dissent, in addition to most of Justice White’s, repudiated his previous support of Buckley.