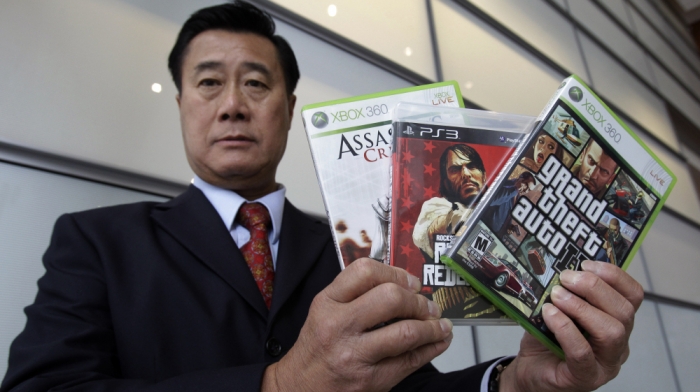 Calif. State Sen. Leland Yee, D-San Francisco, holds up three video games after a news conference in San Francisco, Monday, June 27, 2011. The Supreme Court ruled in Brown v. Entertainment Merchants Association that it is unconstitutional to bar children from buying or renting violent video games, saying government doesn't have the authority to "restrict the ideas to which children may be exposed." Yee wrote the video game ban. (AP Photo/Paul Sakuma, used with permission from the Associated Press)

In Brown v. Entertainment Merchants Association, 564 U.S. 768 (2011), the U.S. Supreme Court ruled that a California law prohibiting the sale or rental of violent video games to minors violated the First Amendment. The law had extended the concept of obscenity, reserved for sexual materials, to violent materials.

A group of video game and software companies challenged the law in federal court. The federal district court enjoined the enforcement of the law, finding that it violated the First Amendment. The 9th U.S. Circuit Court of Appeals affirmed.

On further appeal, the U.S. Supreme Court also determined the California law violated the First Amendment by a 7-2 vote. Writing for the majority, Justice Antonin Scalia rejected the state’s argument that violent video games could qualify as obscenity. “Our cases have been clear that the obscenity exception to the First Amendment does not cover whatever a legislature finds shocking, but only depictions of sexual conduct,” he wrote.

He observed that minors enjoy a significant amount of First Amendment protections. He also noted that there has been a long tradition of violent themes in books. In classic Scalia language, he wrote: “Grimm’s Fairy Tales, for example, are grim indeed.”

Scalia then subjected the law to strict scrutiny, finding that the state of California had failed to show a connection between exposure to violent video games and harmful impact on children. He also noted that the law was not narrowly tailored in part because there was a voluntary rating system that informs parents about the dangers of violent video games.

Justice Samuel Alito, joined by Chief Justice John Roberts, concurred in the judgment. He thought that the law was problematic because it failed to distinguish between older and younger minors. However, Alito was open to the idea that playing violent video games could be much different from children’s exposure to other forms of media.

Justice Clarence Thomas dissented on the basis of his brand of originalism. According to Thomas, the Founding Fathers did not believe that freedom of speech included a right to speak to minors or a right of minors to access speech.

Justice Stephen Breyer authored another dissenting opinion relying on the Court’s decision in Ginsberg v. New York (1968), in which the Court had upheld a New York harmful-to-minors law.

He also found support in several experimental studies that have shown that persons playing violent video games showed more characteristics of aggressiveness than others. He did not believe that there was a less-speech-restrictive alternative that would as effectively protect minors and support parents.