By David Ray Papke
Other articles in Lawyers 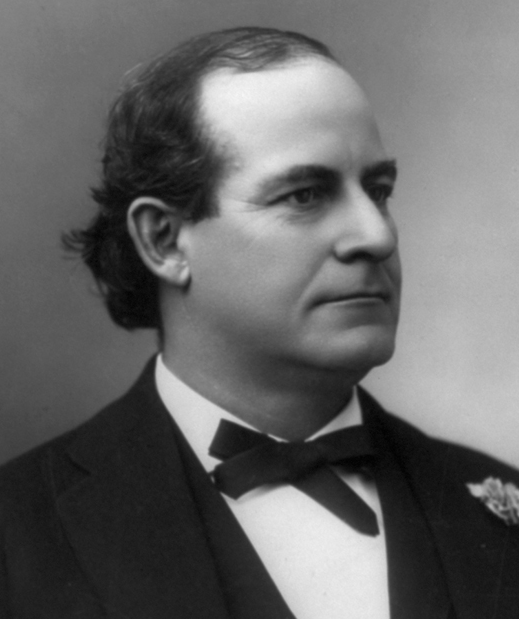 William Jennings Bryan (1860–1925), pictured here in 1902, was a prominent progressive politician and American statesman in the late 19th and early 20th centuries. During the final years of his life, his defense of Christian fundamentalism in the famous Scopes monkey trial of 1925 clashed with the First Amendment’s prohibition of state sponsorship of religion. (Image by James Edward Purdy via Wikimedia Commons, public domain)

William Jennings Bryan (1860–1925) was a prominent progressive politician and American statesman in the late 19th and early 20th centuries. During the final years of his life, his defense of Christian fundamentalism in the famous Scopes monkey trial of 1925 clashed with the First Amendment’s prohibition of state sponsorship of religion.

A former member of Congress from Nebraska, Bryan ran for president three times as the Democratic Party’s candidate. In the watershed 1896 election, he advocated the free coinage of silver, an income tax, and the selection of more liberal Supreme Court justices — all progressive demands at the time — but he lost to Republican candidate William McKinley. In his 1900 campaign, Bryan stressed the dangers of imperialism, but he lost again to McKinley. In 1908 he ran unsuccessfully against Republican William H. Taft.

After his party won the White House with Woodrow Wilson as its candidate in 1912, Bryan became Wilson’s secretary of state.

As a nationalist, Bryan endorsed U.S. control of the Panama Canal and advocated for a strong presence in the Caribbean. He was horrified by the slaughter of war and was able to induce thirty countries to pledge to investigate and discuss their disagreements before going to war. As World War I began in Europe, Bryan argued for maintaining neutrality. He resigned his cabinet position when he perceived that the Wilson administration was heading toward war with Germany.

Bryan fought against what he saw as increasingly godless culture

After the war, Bryan had less political power than at any point in the preceding 35 years, and he began criticizing American culture and society aggressively.

He deplored the consumption of alcoholic beverages and led the “dry” forces in making Prohibition part of the U.S. Constitution. Bryan also believed the nation was becoming increasingly godless, and in championing a “Christian Commonwealth,” he seemed at times to ignore the establishment clause of the First Amendment.

Bryan’s greatest concern was the public’s increasing acceptance of Darwinian thought and theories of evolution; he pleaded with state legislatures to pass laws barring public schools from teaching evolution. His efforts were successful in Tennessee, where a state statute made it illegal to teach “any theory which denies the story of the Divine creation of man as taught in the Bible and to teach instead that man is descended from a lower order of animals.”

First Amendment did not apply to state laws at the time

Clarence Darrow, one of the era’s most prominent lawyers, defended Scopes, with assistance from Arthur Garfield Hays, counsel to the American Civil Liberties Union. As the Supreme Court had not yet applied the First Amendment to the states via the Fourteenth Amendment, the presiding judge barred any consideration of whether the Tennessee statute violated the First Amendment. Toward the end of the trial Bryan himself took the stand and faced skillful questioning by Darrow that revealed Bryan’s limited knowledge of modern biological science and of the Bible’s content.

Bryan died in 1925, five days after Scopes was convicted and fined. The Tennessee Supreme Court reversed the conviction on a technicality without ruling on the constitutionality of the law. More than 40 years later, the U.S. Supreme Court, in a unanimous opinion in Epperson v. Arkansas (1968), ruled that a comparable Arkansas law violated the First Amendment proscription of the state establishment of religion.

This article was originally published in 2009. David Ray Papke is a professor of law at Marquette University in Milwaukee, Wisconsin, and a long-time teacher and scholar of American legal history.