By Gina Logue
Other articles in Lawyers 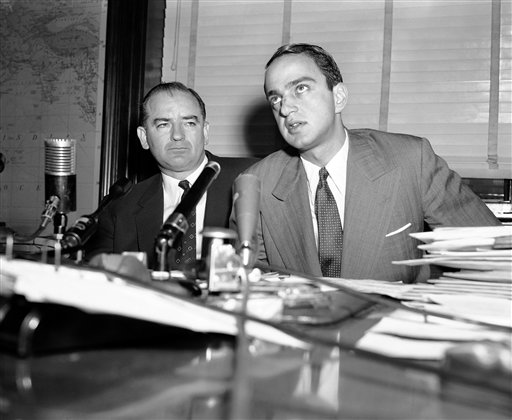 Roy Cohn (1927–1986) is best known for his work as the chief counsel to Sen. Joseph McCarthy, the Wisconsin Republican whose interrogations of alleged communists during the Cold War “Red Scare” contributed to a chilling effect on freedom of speech and freedom of association in the 1950s. In this photo, Cohn speaks at a 1954 news conference. McCarthy listens at left. (AP Photo/Harvey Georges, used with permission from the Associated Press)

Roy Marcus Cohn (1927–1986) is best known for his work as the chief counsel to Sen. Joseph McCarthy, the Wisconsin Republican whose interrogations of alleged communists during the Cold War “Red Scare” contributed to a chilling effect on freedom of speech and freedom of association in the 1950s.

Cohn, the only child of a New York judge, earned his law degree from Columbia University at the age of 20. In his first job, working for the U.S. attorney’s office in Manhattan, he quickly made a name for himself prosecuting cases of people with alleged ties to the Communist Party.

Impressed with Cohn’s performance at the trial of Julius and Ethel Rosenberg for spying, FBI director J. Edgar Hoover recommended that he be hired as chief counsel to the Senate Permanent Subcommittee on Investigations. McCarthy, who chaired the panel, hired the 24 year-old Cohn in January 1953.

Cohn's credibility was damaged during interrogation of Annie Lee Moss

Characteristic of Cohn’s aggressive style was his grilling of Annie Lee Moss, an African American code clerk in the Pentagon, in March 1954.

An FBI informant, while admitting that she had never met Moss personally, had claimed that Moss’s name appeared on the membership rolls of the Communist Party of the United States, an allegation Moss denied. Cohn, using the informant’s testimony, also asserted that Moss had associated with a Robert Hall, a white man identified by Cohn as “one of the leading Communists in the District of Columbia.”

Moss testified that the Robert Hall she knew was black. As it turned out, more than one Annie Lee Moss lived in the Washington, D.C., area, but Cohn never established to the subcommittee’s satisfaction that he and his informant had summoned the one they sought. Furthermore, although Moss was suspected of reading and altering encoded messages and passing them to the Soviets, when Democratic senator Stuart Symington of Missouri asked her to read the official statement suspending her from her job, her illiteracy became evident. When Symington asked Moss if she had ever heard of Karl Marx, she replied, “Who’s that?” Cohn’s credibility was forever damaged.

After McCarthy era, Cohn became a lawyer to celebrities, including Donald Trump

Having resigned his government post after the McCarthy-era hearings, Cohn went into private practice and became a bon vivant on the New York social scene.

His celebrity clients included Donald Trump and Steve Rubell and Ian Schrager, the co-owners of Studio 54, a popular New York discotheque. Cohn remained a magnet for controversy, however, suffering disbarment in New York state for improper conduct the month before he died of complications from AIDS at the age of 59.