By Howard Leib
Other articles in Lawyers 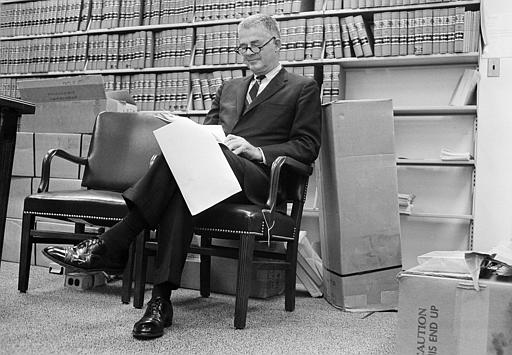 Archibald Cox, a distinguished lawyer, is best known for his role as special prosecutor in the Watergate investigation, but his career also involved him in a number of First Amendment issues. In this 1973 photo, Cox sits in his Washington office as he reads a U.S. district judge's order that President Nixon produce tapes of the White House conversations on Watergate for private judicial inspection. (AP Photo/Bob Daugherty)

Archibald Cox (1912–2004), a distinguished lawyer, is best known for his role as special prosecutor in the Watergate investigation, but his career also involved him in a number of First Amendment issues.

In 1961 President John F. Kennedy, for whom Cox had previously served as a speechwriter and adviser, appointed him as solicitor general. In this capacity, Cox won a variety of cases defending the expressive rights of civil rights protesters.

In 1965 Cox returned to his former position on the faculty at Harvard Law School. He wrote a report for Columbia University dealing with student protests at that institution and helped guide Harvard University’s policies in response to student anti-war protests from 1969 to 1972.

In May 1973, Attorney General Elliot Richardson appointed Cox the first special prosecutor in the Watergate scandal.

Cox’s investigation contributed to the chain of events leading to the resignation of President Richard M. Nixon. After testimony revealed that the Nixon administration had installed a recording device in the Oval Office, Cox subpoenaed tapes of conversations that took place there.

When Nixon refused to turn over the tapes, citing executive privilege, Cox took the matter to court. Finding that the president was not above the law, the courts ordered Nixon to give the tapes to Cox. The president instead offered to supply Cox with transcripts. When Cox rejected this approach, Nixon ordered him fired.

Cox served as the chairman of Common Cause, a nonprofit lobbying organization focused on campaign finance reform that helped secure the decision in Buckley v. Valeo (1976) upholding much of the Federal Election Reform Act of 1974. He was the recipient of the Paul Douglas Ethics in Government Award in 1995 and also received a Thomas “Tip” O’Neill Citizenship Award.