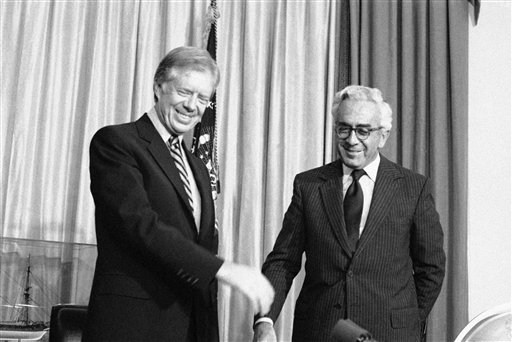 U.S. President Jimmy Carter reaches to shake hands with Lloyd W. Cutler, during an announcement at the White House in 1979, of Cutler’s appointment as a White House counsel. Cutler successfully argued three First Amendment cases before the Supreme Court. (AP Photo/Cook, used with permission from the Associated Press)

In the course of a long and distinguished legal career, Lloyd N. Cutler (1917–2005), an attorney based in Washington, D.C., argued several First Amendment cases before the Supreme Court. He also served as a presidential counselor and adviser.

Born in New York City, Cutler followed in the footsteps of his father, a law partner with Fiorello H. LaGuardia, a future mayor of the city. After earning undergraduate and law degrees from Yale University, he joined a corporate law firm on Wall Street. During World War II Cutler moved to Washington, where he worked briefly for the federal government before enlisting in the army. In 1962 he co-founded Wilmer, Cutler & Pickering, which became one of the country’s leading law firms, and went on to serve as White House counsel to Presidents Jimmy Carter and Bill Clinton.

Cutler argued three notable First Amendment cases before the Supreme Court, including Buckley v. Valeo, the landmark campaign finance case in which the Court upheld most third-party contribution limits of the Federal Election Campaign Act of 1971.

In NAACP v. Claiborne Hardware (1982), Cutler convinced a majority of the Court to protect the NAACP from civil liability for a boycott of white businesses.

He also successfully argued for free speech rights of public employees in Rankin v. McPherson (1987), a case brought after Ardith McPherson, a government employee in Texas, was fired for making an intemperate remark following the attempted assassination of President Ronald Reagan.