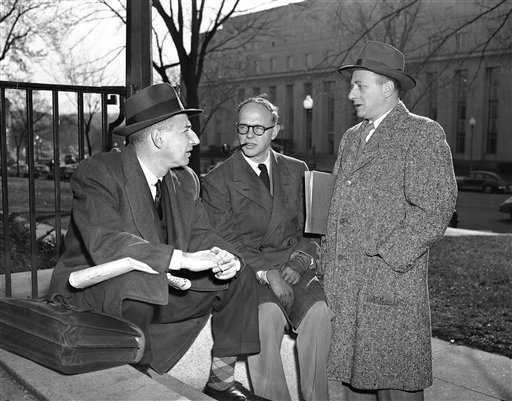 Joseph Forer (1911–1986), a civil liberties attorney, achieved prominence by challenging the constitutionality of federal laws used to target and punish suspected members of the Communist Party. In this photo, Forer, right, talks with Frederick Vanderbilt Field, center, millionaire New Yorker and a registered agent for Communist China, Dec. 1, 1950. Forer and Harold Cammer, left, were his attorneys. (AP Photo/Harvey Georges, used with permission from the Associated Press)

Joseph Forer (1911–1986), a civil liberties attorney, achieved prominence by challenging the constitutionality of federal laws used to target and punish suspected members of the Communist Party.

Forer was a founder of the National Lawyers Guild

Born in Trenton, New Jersey, Forer obtained his undergraduate degree from Rutgers University and his law degree from the University of Pennsylvania. In the 1930s, he became an attorney with the National Labor Relations Board. During World War II, he worked in the federal government for the Office of Price Administration. In 1946 Forer entered private practice with attorney David Rein. He remained at Forer and Rein until his retirement in the late 1970s. Along the way, he was a founder of the National Lawyers Guild.

Among the many cases Forer argued before the Supreme Court were several involving First Amendment freedoms: Kimm v. Rosenberg (1960), Communist Party of the United States v. Subversive Activities Control Board (1961), and Aptheker v. Secretary of State (1964). He prevailed before the high court in Watts v. United States (1969), even though the Court did not conduct oral arguments. In Watts, the Court determined that true threats were not protected by the First Amendment, but ruled that Forer’s client, Robert Watts, engaged in crude political hyperbole rather than a true threat.