By John R. Vile
Other articles in Lawyers 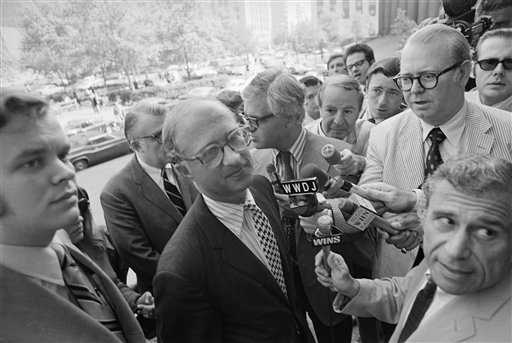 James C. Goodale, a prominent First Amendment attorney, is best known for leading the New York Times in its successful litigation in the Pentagon Papers case, New York Times Co. v. United States (1971), which culminated in the newspaper’s victory. In this photo, Goodale, striped shirt, is besieged by reporters in 1971 on his arrival at Federal Court to answer charges brought against the Times by federal security authorities regarding the Pentagon Papers. (AP Photo/Davis, used with permission from the Associated Press)

As general counsel for the Times, Goodale challenged the advice of the paper’s outside law firm to drop the case, urged it to fight the government’s injunction against publication of the Pentagon Papers, and put together a defense team for the newspaper. Since then, Goodale has continued his defense of First Amendment freedoms as a lawyer, columnist, television producer, and law professor.

Born in Cambridge, Massachusetts, Goodale earned an undergraduate degree from Yale University in 1955 and a JD from the University of Chicago three years later. He is a partner in New York City’s Debevoise & Plimpton, where he and his firm have represented many news organizations. He has taught at several universities, including Fordham University, where he teaches a course titled Old Media, New Media, the Internet, and the First Amendment. He has passed along his knowledge of First Amendment law to other lawyers through a course on communications law that he teaches at the Practicing Law Institute. He has written extensively on the Pentagon Papers and has a television program called “Digital Age.”

Goodale has advocated for reporters' privilege

Goodale, a strong advocate of reporters’ privilege, has engaged in law suits that have prompted the adoption of state shield laws. In addition to serving on the boards of a number of organizations devoted to journalistic rights, he once chaired the Committee to Protect Journalists. One of his current concerns is the effects of media concentration on First Amendment freedoms.