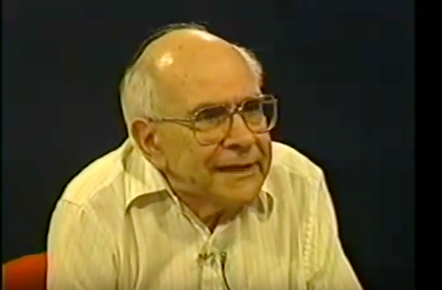 Arthur Kinoy, a well-known civil liberties attorney, who argued six cases before the Supreme Court, including two that centered on First Amendment issues. This photo is a screen capture from a video on YouTube where Kinoy is interviewed in 1990.

Among other things, he represented accused espionage agents Ethel and Julius Rosenberg, challenged laws that restricted the activities of civil rights protesters, and battled the Nixon administration over the use of wiretaps.

Born in Brooklyn, New York, Kinoy obtained his undergraduate degree from Harvard in 1941 and his law degree from Columbia in 1947. He then formed a law firm with classmate William M. Kunstler and his brother, Michael J. Kunstler. The trio referred to the firm Kunstler, Kunstler, and Kinoy as the “new KKK” in their battle against segregation and other progressive causes.

In 1964 Kinoy joined the faculty at Rutgers Law School, where he taught until his retirement in 1991.

In 1966 he founded the Center for Constitutional Rights with civil rights lawyers Kunstler, Morton Stavis, and Ben Smith, and it is still active today.

The same year, he was ejected from a hearing of the House Un-American Activities Committee, where he was serving as a lawyer, and charged with disorderly conduct.