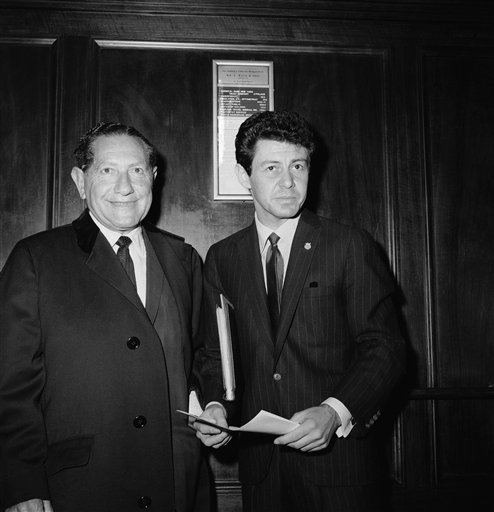 Louis Nizer was a noted trial lawyer who successfully argued two First Amendment cases involving film censorship before the Supreme Court. Nizer had many celebrity clients, including singer Eddie Fisher with whom he is pictured in this photo on the left. The photo was taken in New York in 1964 in relation to a divorce from Elizabeth Taylor. (AP Photo, used with permission from the Associated Press)

The Court ruled in Interstate Circuit, Inc. v. Dallas (1968) that a film censorship ordinance in Dallas, Texas, was unconstitutionally vague.

The Court in Jenkins v. Georgia (1974) decided that the movie Carnal Knowledge was not obscene under standards previously adopted in Miller v. California (1973) and Paris Adult Theatre I v. Slaton (1973).

By contrast, Nizer lost a decision in Fortnightly Corporation v. United Artists Television (1968), in which he had argued that cable television systems were infringing on copyrights when they captured and transmitted copyrighted programs without paying royalty fees (Willis, p. 534).

Nizer was born in London, England. His parents brought him at an early age to Brooklyn, New York. After earning undergraduate and law degrees from Columbia University, Nizer and Louis Phillips formed a law partnership, which they built into the prestigious firm of Phillips, Nizer, Benjamin, Krim & Ballon.

His client list included many celebrities, among them Johnny Carson, Elizabeth Taylor, Mae West, and Muhammad Ali. In 1962 Nizer won a record libel award for John Henry Faulk, a radio performer and storyteller in Austin, Texas, who had been accused of communist leanings.

During his lengthy legal career, Nizer represented the New York Film Board of Trade and the Motion Picture Association of America.

In the latter capacity he played an influential role in the adoption, in 1966, of the Motion Picture Code and Rating Program, which voluntarily assessed the suitability of movies for children. He also wrote several books, including the bestselling My Life in Court (1962).