By Caryn E. Neumann (Updated in August 2017 by David L. Hudson Jr.)
Other articles in Judges and Justices 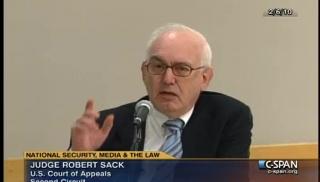 Robert D. Sack is a senior judge on the 2nd U.S. Circuit Court of Appeals in New York. As an attorney, Sack frequently represented news organizations in libel and subpoena cases. (Photo from 2010 C-SPAN video of a panel discussion on the role of media in covering national security issue)

Robert D. Sack (1939– ) is a senior judge on the 2nd U.S. Circuit Court of Appeals and a leading First Amendment scholar.

Born in Philadelphia, Sack earned a bachelor’s degree from the University of Rochester in 1960 and a law degree from Columbia School of Law in 1963. Sack began his legal career as a clerk for Arthur Lane, a judge for the U.S. District Court in New Jersey. In 1964 Sack joined the firm of Patterson, Belknap, Webb and Tyler.

A libel expert, he became a partner and remained with the practice until 1986, when he joined Gibson, Dunn and Crutcher. He briefly left private practice in 1974 to serve as special counsel to the House Judiciary Committee in its impeachment inquiry into President Richard M. Nixon’s Watergate activities. Sack was nominated by President Bill Clinton in 1997 to a seat on the Second U.S. Circuit Court of Appeals and was confirmed by the Senate in 1998.

As an attorney, Sack frequently represented news organizations in libel and subpoena cases.

In 1985, he argued for the Wall Street Journal in the case of R. Foster Winans, a reporter charged with, and ultimately convicted of, violating Securities and Exchange Commission regulations by profiting from stocks about which he had written. Sack voiced the opinion that the reporter’s knowledge was the corporate property of the publication that employed him and that using it improperly was a peculiar form of theft.

In the 1980s and 1990s libel litigation increasingly moved abroad as plaintiffs sought to avoid First Amendment protections for the press. Sack has noted that libel suits initiated in foreign countries have become part of the cost of business for U.S. news organizations that distribute or broadcast internationally.

Sack is an active legal advocate

Sack remains a particularly active legal advocate. He has filed numerous amicus briefs for Dow Jones and Co. in libel cases before the Supreme Court and has served on communications law committees for the New York City Bar Association, the American Bar Association, and Columbia Law School.

He is a director of the William F. Kerby and Robert S. Potter Fund, which assists in funding the legal defense of journalists abroad. Sack’s book Sack on Defamation: Libel, Slander, and Related Problems, now in its 4th edition (2010), is the standard text in the field, offering legal, tactical, and strategic insight into communications law.

Judge Sack took senior status in August 2009.  In senior capacity, he continues to serve on 2nd Circuit panels and write powerfully in First Amendment cases.  For example, he recently wrote a detailed opinion on the application of the ministerial exception in Fratello v. Archdiocese of New York (2nd Cir. 2017).